A NYC criminal lawyer will help with an informed please during arraignment.

An arraignment is a very important and strategic phase of the judicial process. It is the point in time during your New York criminal case when your New York defense attorney states your plea. At an arraignment there will be a formal reading of the criminal complaint so that the defendant may hear and understand the charges being placed against him or her. The defendant is then asked to present a “plea.” Pleas include: “guilty” and “not guilty”, as well as a peremptory plea. A peremptory plea is a plea that tells the prosecution and judge why a trial cannot proceed. The decision about what type of plea to make is a very serious decision that can affect your case, as well as affect your life in the future. You will be provided a court-appointment lawyer, but it is extremely important that you have an experienced private attorney by your side at your arraignment to ensure that you make the decision that is best for you and your future.

If someone has been arrested in Queens, Manhattan, Brooklyn, Bronx or Staten Island, they’re looking at having to endure a 24-hour experience that will end with the first appearance in court — or arraignment.

Arraignments in New York City and its five boroughs are confusing and stressful for the person being arrested. Friends and family will often feel the stress as well while they call the lawyers and scramble to find out information while are desperate to find a way to help.

The procedures in this article are dominant in New York City including all five boroughs. However, keep in mind that there is variation among the boroughs and the procedures outside of New York City may vary slightly.
An arraignment is not a trial. No witnesses are called, and no evidence is presented. The arresting officer does not need to appear, nor does the complaining witness. The guilt or innocence of the accused is NOT decided during arraignment. Normally, the accused will not even be asked to speak as the accused’s attorney will speak for him or her.

From the accused’s viewpoint, an arraignment is about bail — will the judge set bail, and if he does, how much. While other things may happen at an arraignment, the most obvious and significant even is the judge’s decision regarding bail. The defense lawyer will be able to negotiate the terms of the bail, and, in certain occasions, to reduce it significantly.

In New York City, defendants are brought before a judge for arraignment within 24 hours of arrest. After the case has been docketed by the court and the complaint and the accused’s criminal history are ready, the defendant is brought to Criminal Court for arraignment.

Felonies are crimes for which more than one year of imprisonment may be imposed. In a very few felony cases, plea offers may be made at the arraignment. Otherwise, the presiding judge will adjourn the case pending action by a Grand Jury. The case will remain in Part F for the rest of the proceedings before to indictment or a misdemeanor disposition.

Defendants who retain a private attorney before arraignment have a chance to derail the case against them for several reasons.

In New York, intake prosecutors analyze cases to make sure there is evidence of guilt and that prosecution is in the interest of justice. Often though, the caseload is so heavy that reviews are perfunctory and weak cases sometimes slip into the judicial pipeline. If an attorney who is well known to the courtroom can convince the prosecutor of the weaknesses in the case, the case may be thrown out.

Before arraignment, no one in the prosecutor’s office has spent a great deal of time or money on the case. With less invested, it’s easier for the prosecution to let a weak case go.

Dockets and schedules are crowded in New York. Agreeing to dispose quickly of weak cases, prosecutors can spend the little time they have devoted to more serious cases. Also, getting rid of weak cases early in the process saves the prosecutor the embarrassment of showing up in court with a weak case. For these reasons, a good NY criminal defense attorney can point out weaknesses that the prosecutor didn’t consider and the prosecutor may drop the charges before arraignment.

In New York, the first arraignment is called the initial arraignment and must take place within 48 hours of an individual’s arrest. That can be stretched to 72 hours if the individual was arrested on the weekend and unable to see a judge until Monday. Most people arrested must be released if they are not arraigned within 24 hours.

A pre-arraignment conference is held before the return of an indictment. The pre-arraignment conference is scheduled by the Criminal Division office in the borough where the offense occurred. Discovery and other evidence is available to the defendant and their attorney prior to the conference. This gives your lawyer (or, defense team) an opportunity to look at and review the evidence. As a result of this initial discovery, a defendant may decide to try to negotiate a plea bargain. The defendant may also plead guilty to the charges.

When a defense attorney waives the arraignment, it only means that the defendant is aware of the charges and is entering a plea of not guilty. Formal arraignment procedures include having the indictment read aloud and hearing the charges put on the record. Waiving the arraignment accomplishes that without having to take the time to go to court and go through those procedures. The defendant’s case will still be placed on a New York court trial calendar, or docket, and will proceed through the same steps whether the defendant appears for a formal arraignment or not.

The defendant and his attorney will normally be permitted to waive the arraignment if:

If the judge doesn’t set bail, that is called being “released on recognizance,” or ROR. Someone who is ROR’d is released simply on his verbal promise that he will show up at court on the date that is set by the judge. If the judge does set bail, then the accused will be held in custody at Rikers Island until either the case is over, or there is a change to the bail for a variety of reasons.

If a person makes bail, but doesn’t return to court, then New York City gets to keep the money while the police start looking for the individual. If the individual persists and fails to show up to court within 30 days, the person could be charged with the additional crime of bail jumping.

If the bail is high enough that friends and family can’t raise it and they can’t afford a bondsman, the accused could rest in jail for as long as it takes for the case to work its way through the courts. If it will take up to a year or more to get the case ready for trial, then the person will be in jail for one year. Talk you your criminal lawyer to file the proper motions to reduce this waiting period.

While it is possible to get the bail reviewed, it is not very likely that bail will be changed. The law presumes that the amount of bail set at the arraignment is the correct bail. The accused will have an uphill fight trying to talk a later judge into reducing or eliminating bail.

These hearings function to apprise defendants of their constitutional rights, particularly the 6th Amendment right to be informed of the crime for which the defendant is being accused.

Get an Attorney For Your Initial Court Appearance

Defendants charged with felonies may be called upon to make a legal decision that could result in devastating consequences if the wrong decision is made. The potential for this makes it even more imperative to have your attorney there to make a decision.

Retaining a criminal defense lawyer and having him with you during the arrest to arraignment phase can often ease the stress on the defendant as well as their family and friends. Experienced attorneys will be able to speak with the arresting officer and court staff and be in a position to gather reliable information about the nature of the charges in your case.

Top Attorney for Your Arraignment

The attorneys at Bukh Law Firm know that the earlier they become involved in a case, the more they can do to protect their client. Often, the police can obtain damaging statements from defendants long before the arraignment. If an attorney from Bukh Law Firm is involved in the process early enough, he can make it difficult, if not impossible, for the police to legally question the defendant.

Sometimes, part of the decision making process for the arraignment is whether or not to accept a plea bargain that is offered to you by the prosecution. An experienced criminal defense attorney can help you make this important decision, and counsel you regarding the consequences that will come from either outcome; accepting a deal and pleading guilty, or pleading not guilty and proceeding to trial. It is very important to fully understand this phase of the judicial process and work with your New York City criminal lawyer to select a plea appropriate to the case and that best suits your interest.

Our team of some of the best NYC defense attorneys has extensive experience to help you negotiate with the prosecution.

Let a New York City criminal lawyer argue for your bail and help you decide how to plead. Contact Bukh Law Firm, PLLC. now at 800-601-0207 to have a knowledgeable advocate there for you at arraignment. 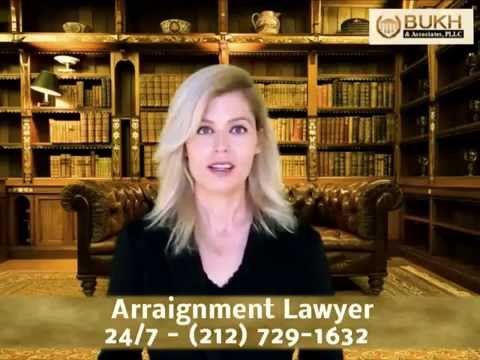