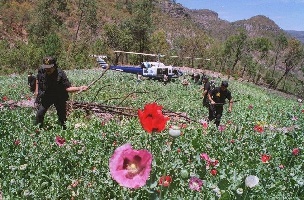 A recent report by The Sentencing Project documents, in considerable detail, something that many Americans uneasily suspect about the way the war the drug war is policed: namely, that it affects African American communities vastly more than those communities “deserve” based on their level of drug use. This isn’t the only report or the only group to note this statistical skew: Human Rights Watch has also released a report documenting similar trends, and the Justice Policy Institute released a report along similar lines in December of 2007. Why is this racial disparity happening, and is there anything that people, including members of the law enforcement community, can do to address it?

I spoke with Ryan S. King, the author of the report, which is called Disparity by Geography: The War on Drugs in America’s Cities. I’ve added a few links and graphs to illustrate what we’re talking about.

Q: One of the first things that caught my eye in the report was the discussion of discretion in policing and the way that plays into racial profiling. Can you explain a little bit about why there is discretion when it comes to drug policing and why that matters?

A: At the very basic level, one could argue about what the definition of a victimless crime is, but a drug offense is victimless insofar as it’s not a violent crime, it’s not a property crime. So it’s not like when police are investigating a murder or a robbery or a burglary or an auto theft where there’s a victim and somebody reports it and the police then reactively take action. It’s much more proactive. The police are going out, they’re searching out these types of offenses, often through different types of subterfuge, whether it’s undercover buy-busts, relying on confidential informants and so on. Most Americans are aware of the unseemly ways in which law enforcement go about detecting drug transactions and making an arrest. So in the fact that these drug offenses are victimless by definition, there’s where the discretion in law enforcement lies.

We all know that there are millions and millions of Americans who are using drugs. The fact is that only a fraction of them are going to be arrested during a year. Law enforcement goes out and they choose the neighborhoods where to pursue the war on drugs and it’s been very clear and well documented that that’s predominantly done in communities of color.

Q: George Will had a column back in June in the Washington Post talking about what he thought explained different arrest rates and different incarceration rates between racial groups. He wrote “the reason more blacks are disproportionately in prison and for longer terms is not racism but racial differences in patterns of criminal offenses.” Do you feel like that’s an accurate characterization?

A: Not when it comes to drug offenses, no. There’s been empirical studies that have looked at the role that differential offending plays in disparities that we see in the criminal justice system, and while different offending is largely to explain for the differences we see in property and violent crimes, that’s not so with drug offenses, and that gets back to this issue of discretion. You can look no further than the National Survey on Drug Use and Health that’s done on an annual basis that shows that African Americans are about 12% of the general population and they’re about 12% of regular monthly illicit drug users. It’s not a matter of two or three times that rate where you might expect to see differential arrest rates. So there’s something else going on besides the fact that African Americans are just using drugs more frequently, and that’s this discretion that law enforcement has in deciding where to pursue the war on drugs.