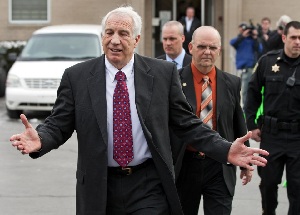 For whatever reason there was a glitch in my post yesterday and I’ve received a number of comments that folks have not been able to access the federal grand jury subpoena issued to Penn State University about the sordid Sandusky investigation. So, here’s the direct link on the Penn State Not only is the content of the subpoena revealing (and not too surprising), but interestingly, the subpoena was received by Penn State on Thursday, February 2, but not publicly announced by Penn State until Friday, February 24.