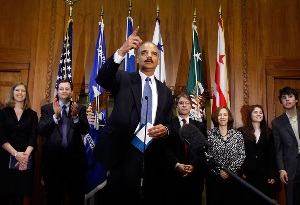 Washington, D.C. – Judicial Watch announced today that has obtained documents in response to local, state, and federal requests revealing that a little-known unit of the Department of Justice (DOJ), the Community Relations Service (CRS), was deployed to Sanford, FL, following the Trayvon Martin shooting to help organize and manage rallies and protests against George Zimmerman.

From a Florida Sunshine Law request filed on April 23, 2012, JW received thousands of pages of emails on April 27, 2012, in which was found an email by Miami-Dade County Community Relations Board Program Officer Amy Carswell from April 16, 2012: “Congratulations to our partners, Thomas Battles, Regional Director, and Mildred De Robles, Miami-Dade Coordinator and their co-workers at the U.S. Department of Justice Community Relations Service for their outstanding and ongoing efforts to reduce tensions and build bridges of understanding and respect in Sanford, Florida” following a news article in the Orlando Sentinel about the secretive “peacekeepers.”

In reply to that message, Battles said: “Thank you Partner. You did lots of stuff behind the scene to make Miami a success. We will continue to work together.” He signed the email simply Tommy.

Carswell responded: “That’s why we make the big bucks.”

Set up under the Civil Rights Act of 1964, the DOJ’s CRS, the employees of which are required by law to “conduct their activities in confidence,” reportedly has greatly expanded its role under President Barack Obama. Though the agency claims to use “impartial mediation practices and conflict resolution procedures,” press reports along with the documents obtained by NYC defense attorney suggest that the unit deployed to Sanford, FL, took an active role in working with those demanding the prosecution of Zimmerman.

On April 15, 2012, during the height of the protests, the Orlando Sentinel reported, “They [the CRS] helped set up a meeting between the local NAACP and elected officials that led to the temporary resignation of police Chief Bill Lee according to Turner Clayton, Seminole County chapter president of the National Association for the Advancement of Colored People.” The paper quoted the Rev. Valarie Houston, pastor of Allen Chapel AME Church, a focal point for protestors, as saying “They were there for us,” after a March 20 meeting with CRS agents.

Separately, in response to a Florida Sunshine Law request to the City of Sanford, Judicial Watch also obtained an audio recording of a “community meeting” held at Second Shiloh Missionary Baptist Church in Sanford on April 19, 2012. The meeting, which led to the ouster of Sanford’s Police Chief Bill Lee, was scheduled after a group of college students calling themselves the “Dream Defenders” barricaded the entrance to the police department demanding Lee be fired.  According to the Orlando Sentinel, DOJ employees with the CRS had arranged a 40-mile police escort for the students from Daytona Beach to Sanford.

“These documents detail the extraordinary intervention by the Justice Department in the pressure campaign leading to the prosecution of George Zimmerman,” said Judicial Watch President Tom Fitton. “My guess is that most Americans would rightly object to taxpayers paying government employees to help organize racially-charged demonstrations.”