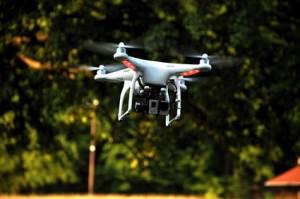 On Monday, July 7, 2014, NYPD police arrested two drone operators after a near miss with a NYPD helicopter over an incident that took place over the George Washington Bridge when the unmanned two drones nearly collided with the helicopter.     The NYPD Aviation Unit helicopter was patrolling around 12:15 a.m. when it had to swerve to miss being hit by two unmanned drones creating a dangerous situation for the helicopter pilot.

The helicopter was able to trail the drones north to where they landed at the corner of  Audubon and Fort George Avenues around 12:35 a.m… The NYPD was dispatched to the scene and the drone operators/suspects Remy Castro, 23, who resides at West 193rd Street, and Wilkins Mendoza, 34, of Post Road, were arrested on the scene by NYPD officers and arraigned on felony endangerment without bail. The suspects claimed that the drones were just toys that they were having fun with not realizing the seriousness of the incident. According to a friend, Castro bought the drones two weeks ago for approximately $500.00 to $700 each, and Castro has been flying them over the neighborhood at night posting videos on Instagram.

Operating drones must be done in accordance with the laws. It you are contemplating buying a drone, it is important to check with the NYPD, local and state last or a qualified and experienced New York criminal defense lawyer to make sure that you do not violate any laws.

Related articles across the web