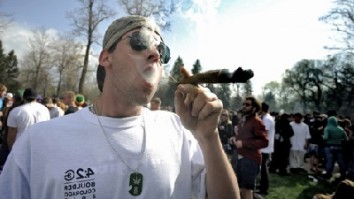 When the New York Times published, “Administration Weighs Legal Action Against States That Legalized Marijuana Use”, those with strong opinions were  quick to jump on it.

“Notice what expressions do not show in the New York Times piece: pivot, possibly stopping the war on drugs, if our drug statutes are doing more damage than good, the drug war a mess, crime and suffering [the drug war] creates. You’d believe that if Obama were going to “pivot,” quietly leaving alone two states that overwhelmingly approved pot and gave him their votes would be the legitimate place to begin.”

The article explores the potentially extreme choices but does not indicate which, if any, of the options, is being considered by Washington. Guither says the article “appears to be an obvious administrative trial balloon” primarily to see the reactions and guage what the political result may be from either action or no action.

Experts believe that if the administration chooses to treat Colorado and Washington citizens as dangerous felons and allocate enforcement capabilities to bother people for obeying a state law, then the administration will have “hell to pay.”

Proposing the argument that marijuana is no more damaging to a person than liquor, which is legal and marketed widely, observers feel the coalition Obama has built will splinter. The possibility exists that libertarian Republicans will grab the point and cheer for a return to strong federalism.

The possibility that the Justice Department will treat legalized marijuana for optional prosecution is beyond reason. Obama has continued to support pretty reasonable policies. He has shown that is he is not a radical – proposing regulations intended to make a sociological case. He’s a pragmatist — trying to correct enduring dilemmas.

The precipitating event which appears to have created this situation is the war on drugs.

The governmental war on marijuana has proven to be discriminatory in its implementation and lacking in any type of scientific basis. Supporters of legalization are demanding a discussion of whether the science supports the classifying of cannabis as a Schedule One drug. A classification that makes it as deadly as heroin or cocaine.

To be classified as a Schedule 1 substance, three criteria have to be met. These are:

Marijuana, by any measure and standard, fails to rise to a Schedule 1 class.

Eighteen states and the District of Columbia have approved marijuana for medical use. Safety? While celebrity deaths from heroin overdoses are regularly reported in the media, there have been no reported overdoses from cannabis. Supporters believe that instead of tightening enforcement, Washington should kick-start the debate for re-classifying marijuana.

One notable precedent comes out of Iowa. On February 17, 2010, after reviewing testimony in public hearings and evaluating over 10,000 submitted documents, officials on the Iowa Board of Pharmacy voted, unanimously, to advise the Iowa legislature to remove cannabis from Schedule I of the Iowa Controlled Substances Act.

The debate needs to proceed naturally and fairly as the burden is on the government to prove that pot is as deadly as heroin and should be classified the same. The process itself will reveal the ethnic and social panic that produced the anachronism of the law.

Leading marijuana activists in each state are calling for the Obama administration to do nothing when it comes to the individual states and their legislator’s decisions. The activists would also like to see the Drug Enforcement Agency’s priorities set so that a medically useful substance is not a primary issue for law enforcement.

Washington has some catching up to do when it comes to public opinion.