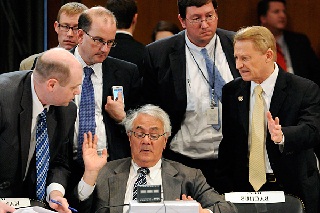 There’s an old “joke” among prosecutors that anyone can convict the guilty, but it takes a really exceptional prosecutor to convict the innocent. Not very funny, is it? The recent U.S. Supreme Court decision in Smith v. Cain, 132 S.Ct. 627 (2012), demonstrates that there are still criminal prosecutors out there who either don’t understand their obligations under Brady v. Maryland, 373 U.S. 83 (1963), or who don’t care. Either way, the case should be a wake up call to both criminal defense counsel and prosecutors.

The facts in Smith are straightforward. Defendant was charged with, among other things, the brutal murder of five individuals during a home invasion armed robbery. At trial, the state presented the testimony of one witness who was present at the time of the murders. He positively identified defendant as one of the killers. The state presented no other corroborative evidence tying defendant to the murders. A jury convicted defendant based exclusively on the eyewitness testimony of the single witness.

The conviction was upheld on appeal, and the Louisiana Supreme Court, as well as the U.S. Supreme Court, denied review. Defendant then sought post-conviction relief in the Louisiana courts. Only then was he provided with the handwritten notes of the lead homicide detective indicating that the state’s star witness had told the detective, both on the night of the murders and again five days later, that he could neither provide a description nor identify any of the individuals involved in the murders. Amazingly, this information was not disclosed to the defense prior to trial. On this basis, the U.S. Supreme Court, in an 8-1 opinion (more on the dissenting opinion of Justice Clarence Thomas in a later blog post), found that the prosecutors had violated Brady and reversed the convictions, remanding the case to the Louisiana state court.

In my experience, the vast majority of prosecutors are highly ethical professionals who understand and take very seriously their obligation to disclose exculpatory evidence. So, what happened in Smith? This wasn’t a DUI or a criminal trespass case. This was a multiple homicide case and there can be no question but that experienced prosecutors were assigned to handle it. In its brief to the Court, the state did not claim that the notes of these interviews were somehow overlooked or that their existence was not known to the prosecutors. Rather, the state attempted to justify the withholding of the notes through a variety of fanciful arguments as to why the government would have prevailed at trial even if the exculpatory evidence had been produced. Of course, the best evidence of just how damaging these notes actually were to the state’s case can be found in the fact that they intentionally suppressed them. If the notes contradicting the single eyewitness’s testimony were so benign, why not disclose them? The fact of the matter is, of course, that any experienced defense attorney would have been able to use the detective’s notes to thoroughly discredit the witness and the state knew this.

At first glance, it seems somewhat remarkable that the state of Louisiana would attempt to justify the tactics of these prosecutors. But maybe it isn’t so remarkable. Maybe there are still places where the reckless attitude of winning at all costs trumps the bedrock concept of doing justice in every case. If so, criminal defense counsel need to be particularly vigilant in those jurisdictions, or at least in dealing with those prosecutors. And all prosecutors, including those in the U.S. Department of Justice, Civil Rights Division, should take notice as well.