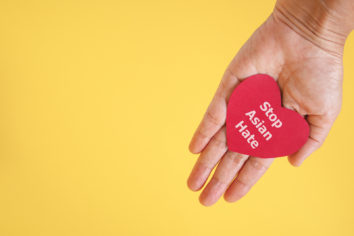 In New York, we are very proud of our heritage as the gateway for the immigrant experience through Ellis Island. But our current pandemic has forced us to acknowledge an unfortunate underbelly of the American immigrant experience: hate crimes that target specific populations.

For many Asian Americans and people of Pacific Island descent, they are experiencing a new surge in anti-Asian prejudice since COVID has come to our shores.

Recent Attacks On Our Subway System

A recent attack of a 68-year old Sri Lankan man is just the most recent in a flurry of Asian attacks on New York City subways in recent months. Unfortunately, for many Asian Americans, these attacks are disturbing but not altogether surprising. They are just the most recent example of violence targeted against the Asian community since the pandemic began.

Last month, one such attack was perpetrated by a 23-year old in Chinatown. Without speaking a word to the victim, the perpetrator stabbed an Asian American man in the back while he was walking home. While prosecutors claimed that they lacked evidence of a hate crime, the man was charged with attempted murder. But the community was enraged while voicing that they thought these kinds of attacks were being overlooked by the legal authorities.

The Difficulty of Prosecuting a Hate Crime in New York

In New York, prosecutors must show that victims are targeted specifically because of race to prove a hate crime. But motive can be particularly difficult to prove in these cases, especially since there are no widely understood symbols associated with anti-Asian prejudice. Because of this, anti-Asian sentiment is often less clearly defined than anti-Black or anti-semitic bigotry.

Between January 1 and March 14 of this year alone, there have been at least ten documented cases of suspected hate crimes against Asian Americans in New York City, according to the police department’s Hate Crime Task Force. The most recent shootings in Atlanta have shined a well-deserved light on these hate crimes not only in our city but around the country.

Organizations that study human rights, such as the Center for the Study of Hate and Extremism, a nonpartisan research and policy center based in San Bernardino, California, have reported that hate crimes specifically targeting Asian Americans have increased by 149 percent over last year alone. What has spawned our current incidents of these attacks?

Response to a Growing Trend

Many advocates believe that the former administration with its reliance on racial rhetoric surrounding COVID is at least partially responsible for the new uptick in racial hate crimes targeting the Asian American and Pacific Islander communities.

In the meantime, Asian American activists and leaders have recently testified before a house panel on civil rights concerning the alarming increase in anti-Asian discrimination and violence in their own communities.

Here in New York, as our designation of gateway to the world is held up for review, it is essential for us to shine the light on ourselves and to understand how we, as individuals, set the tone for equal rights for all in our city. If you have been the victim of a hate crime in New York, call 911 or report it to your local precinct and they will respond with immediate assistance.

If it is determined that it was an incident motivated by racial or ethnic bias, they will notify the Hate Crime Task Force to intercede.

Because police are out in higher numbers to combat the rising amount of crime in our subway system, there are also the possibilities that innocent people get caught up in the additional police presence. If you have been charged with a crime in New York City, get the assistance of a skilled criminal defense team to work on your behalf.