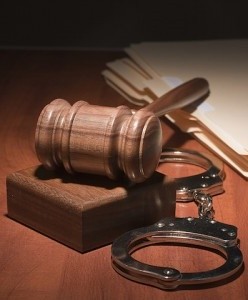 The Supreme Court today handed down United States v. Rodriquez, a sentencing case involving the interaction between state and federal law for people with prior “serious drug offense” convictions. I’m too slammed to do a , but here’s the link to the opinion.

Prof. Berman has a little analysis at the Sentencing Law and Policy Blog.

Update: That’s Rodriquez, not Rodriguez. me.

Update 2: This case basically turns on the language of the Armed Career Criminal Act (ACCA), 18 U. S. C. §924e(2(A(), and whether the defendant’s three prior drug convictions in Washington — all of which occurred on the same day — counted as  “serious drug offense” under that law. A “serious drug offense” the ACCA is one for which ““a maximum term of imprisonment of ten years or more is prescribed by law” for the “offense.”

The defendant could have faced more than 10 years in for his three offenses as a result of the state recidivist enhancements to his sentence. Therefore, says Justice Alito, the state priors constituted a serious drug offense. It might be argued that the maximum sentence was not exactly for the “offense” but rather for being a recidivist, but the Court says “we have squarely rejected this understanding of recidivism statutes.”

Most relevant for the purpose of this blog is the following passage:

We reject respondent’s argument that, under our interpretation, offenses that are not really serious will be included as “serious drug offense ” because of recidivist enhancements. In §924e(2(A(), Congress chose to rely on the “maximum term of imprisonment  prescribed” by state law as the measure of the seriousness of state offenses  involving the manufacture, distribution, or  possession of illegal drugs. Congress presumably thought—not without reason—that if state lawmakers provide that a crime is punishable by 10 years’ imprisonment, the lawmakers must regard the crime as “serious,” and Congress chose to defer to the state lawmakers’ judgment. Therefore, our interpretation poses no risk that a drug-trafficking offense will be treated as a “serious” without satisfying the standard that Congress prescribed.

The court follows this up with a footnote stating:

In any event, the only “minor drug crime” that respondent identifies as potentially constituting an ACCA predicate based on recidivist enhancement is of a 21 U. S. C. §812, Schedule III narcotic in violation of Mich. Comp. Laws Ann. §3337401 (West Supp. 2007). Given that Schedule III substances include anabolic steroids and painkillers with specified amounts of certain narcotics like opium, see 21 U. S. C. §812, one might debate that distribution of these narcotics is not “serious” in the generic sense of the word. However, Congress chose to defer to the Michigan Legislature’s judgment that the offense was “serious” enough to warrant punishment of first offenses by up to seven years’ imprisonment, and certain repeat offenses by a maximum term of life imprisonment. See Mich. Comp. Laws Ann. §§333.7401, 333.769.12.

The dissent, written by Justice Souter and joined by Justices Stevens and Ginsburg, notes:

It is odd to think that Congress would have piggybacked the federal system on state schemes, given the extraordinary and irreconcilable variations among state policies on the subject.

For one thing, the States’ recidivism schemes vary in their methods for augmenting sentences. Iowa’s law, for example, subjects repeat drug offenders to triple penalties, Iowa Code §1244111) (2005); but in Wisconsin a repeat drug distributor will see his maximum term increased by a fixed number of years, whatever the starting point, see, e.g., Wis. Stat. §961481(b) (2003–2004) (4-year increase for Class H felony such as selling 1 kilogram of marijuana).

More striking than differing structures, though, are the vast disparities in severity from State to State: under Massachusetts drug laws, a third conviction for selling a small amount of marijuana carries a maximum of 2.5 years. Mass. . Laws Ann., . 94C, §32Cb) (West 2006). In Delaware, a third conviction means a mandatory sentence of life in prison without parole. See Del. Code Ann., Tit. 11, §4214b) (2007) (third-felony penalty of life without parole for violations of non-narcotic controlled substances law, Tit. 16, §4752 (2004)). That Congress might have chosen to defer to state-law judgments about “seriousness” that vary so widely for the same conduct is at least open to doubt. And that doubt only gets worse when we notice that even where two States have similar maximum penalties for a base-level offense, their recidivist enhancements may lead the same conduct to trigger the ACCA sanction in one State but not the other: on the Court’s view, an offender’s second conviction for selling, say, just over two pounds of marijuana will qualify as an ACCA predicate crime if the conviction occurred in Arizona (maximum of 13 years), Iowa (15 years), Utah (15 years), and the District of Columbia (10 years), for example; 4 but it will fall short of the mark in California (8 years), Michigan (8 years), and New York (8 years).5 Yet in each of these States, the base-level offense has a maximum term falling within a much narrower range (between 3.5 and 5.5 years).6 With this backdrop of state law, the Government can hardly be heard to say that there would be something “incongruous” about a federal law targeting offenses flagged by the penalties assigned only to bare conduct, without regard to recidivism or other offender facts. Brief for United States 17.