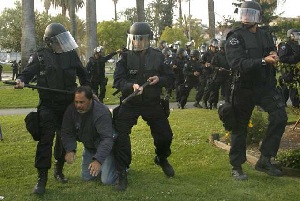 Pete at Drug WarRant had an troubling post this weekend about a couple ways that private companies have beenstepping in to the police’s shoes in carrying out drug policing. Pete wrote about a private, “voluntary” drug and alcohol screening stations for motorists (see examples here and here), and also about the use of Blackwater to work on counter-narcoterrorism activities.

Both these things worry me because they’re yet another avenue for Americans’ Fourth Amendment rights to get steamrolled by the drug war , and they come at a time when we’ve already carved a ton of drug-related exceptions to basic constitutional protections. Under a privatized research/policing scheme of the sort used in the Pacific Institute for Research and Evaluation screening stations that Pete discusses, I think it’s an open question whether a motorist would have any right to suppress evidence that was taken and turned over to the cops.

It’s easy for law enforcement to say, in the abstract, that whatever a group like PIRE finds is a purely academic question. But what happens when some “researcher” finds an abducted child in a car or 1,000 pounds of cocaine? What happens when dna from a saliva sample taken by PIRE matches that of a criminal suspect? I think it would be naive to imagine that this type of evidence won’t get handed over to the police.