With a wife and two daughters, 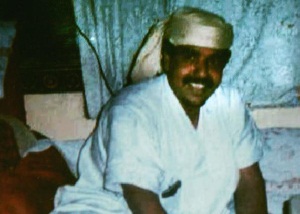 Salim had to earn a living. Life in Yemen was hard. A compatriot told him about work opportunities in Afghanistan. Salim didn’t know that morning as he kissed his family goodbye that he wouldn’t see them again for nearly eight years.

Salim Ahmed Hamdan, Osama bin Laden’s driver, was the initial “Gitmo” detainee to appear at trial. Convicted of rendering material aid for terrorism, the Yemeni-born Hamdan was condemned to prison for five and a half years.

Born in 1970 in Wadi Hadhramaut, Yemen, Hamdan married and had two daughters before he went to Afghanistan for work. Recruited to al-Qaeda by Nasser al-Bahri, Hamdan eventually started working as a driver for Osama bin Laden because he needed the money.

Seized by Afghan troops, Hamdan was delivered to the American military in 2001. He was first accused of collusion in July 2004. Challenging the legitimacy of the commission that heard his case, the U.S. Supreme Court ruled in 2006 the military commissions established by then-president George W. Bush were illegal.

Later, in September 2006, Congress enacted the Military Commissions Act and in May 2007, Hamdan was indicted again. This time with plotting to perpetrate terrorism and giving material aid for terrorism: for working as bin Laden’s driver.

Two years later, in August 2008, a tribunal absolved Hamdan of the collusion charge and found him guilty simply of giving material support. Doomed to five and a half years in prison, Hamdan was granted respite for time served — over a five-year period. Hamdan was returned to Yemen to complete the remaining period of his punishment and was freed by Yemen authorities in January 2009.

During Hamdan’s incarceration in Guantanamo, American troops struck, hit and kicked him. Hamdan was detained in isolation — in a windowless cell — for almost a year. Sexually harassed and deprived of sleep by his interrogators, Hamdan today is a free man.

Now 46, Hamdan is heavier and happier. With his wife beside him, Hamdan speaks like a different man than the one with which his attorney’s had spent countless hours in Guantanamo cells.

To anyone familiar with the sordid tale of Guantanamo BayCuba, there are still fathers, sons, husbands and brothers still trapped inside; over a decade after they were locked up. None of the remaining men have been charged with crimes, and the U.S. government cleared them for release years ago.

Compared to the ones still incarcerated, Hamdan is the lucky one. As one of the earliest detainees, he had the opportunity to defend himself. Only a small handful of the detainees in Guantanamo were ever tired, and the rest remain in limbo.

The stories of the prisoners’ pain can become oppressive. Each man has a family desperate for news of their fate.

Some experts call it “the Yemen problem.” It is the primary reason the prison at Guantanamo Bay is open — despite assurances from President Obama to close it. Of the 150+ inmates still there in 2014, over half were Yemeni. The present administration intends to continue holding some detainees indefinitely although it has determined that 56 of the Yemenis pose no threat to America.

Apprehended in the early months of the “war on terror”, these men were picked up in Afghanistan or Pakistan and have lost touch with their families.

If the Yemeni population is not allowed to leave Guantanamo, the American archipelago will never close; unless America follows through with its promise to restart transfers to Yemen.