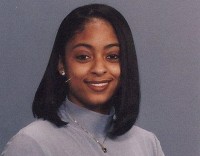 For years, rumors circulated about a wild party at the Manoogian Mansion in 2002, hosted by disgraced ex-Mayor Kwame Kilpatrick, and featuring strippers. It was further said the Mayor’s wife Carlita came home earlier than expected and battered one of the strippers, a woman named Tamara Greene, whom security men drove to Detroit Receiving Hospital.

His Honor swore up and down that there was no such party, and Attorney General Mike Cox backed him up, calling the party “an urban legend.”

Tamara Greene, whose stripper name was “Strawberry,” was shot to death on April 30, 2003 on Detroit’s west side whie sitting in her car with boyfriend Eric Mitchell. clickondetroit.com 10/1/09. The hail of bullets came from an SUV, and though the vehicle made a second pass around Greene’s car, and its two occupants could see that Mitchell was only wounded, did not shoot him again. That meant that Greene had been the target.

I think there is no longer any doubt that there was indeed a party at the Manoogian Mansion, and I make that claim based upon events that transpired after Greene was killed. For Detroit police, it began as an ordinary homicide investigation. But when a homicide detective tried to run down a lead involving the party or the Mayor, his effort was quashed by the police brass. Some cops were transferred or demoted. Former homicide detective Alvin Bowman claimed in a sworn affidavit that Greene was killed by a member of the Detroit police department based on the shooting pattern and the type of weapon used. mytv20.com, 3/5/08. A second investigator said he was demoted for investigating the Greene shooting. detnews.com, 9/25/09. He has filed a civil action against the city and three top cops, claiming the latter protected an elected official by covering up that official’s relationship with Greene. The investigation was put into the cold case file a year early by department standards.

Greene’s family filed a lawsuit in 2005 against top city and police officials alleging that they obstructed the investigation for political purposes. Recently a team of relatively new officers filed sworn affidavits that they were shut down when they tried to follow leads in the case. By the way, one lead that was quashed was that Kwame Kilpatrick’s name came up as an associate of self-proclaimed hit man Vincent Smothers. clickondetroit, 9/25/09. If that name sounds familiar, then you may have read my article “The Runyon Street murders,” 9/19/09, in which Smothers confessed to being one of the shooters in a dope house raid. Policeman Ira Todd said he established a possible connection between Smothers and a reputed drug dealer in Lexington, Kentucky who claimed to have personal and professional connections to Kilpatrick. That lead was also shut down in the last few months of Kilpatrick’s mayorship.

Recently a team of relatively new officers filed sworn affidavits that their attempts to investigate the Greene case were thwarted. When Police Chief Evans read this stack of affidavits he could not have been happy. In a news item on the front page of this morning’s Detroit Free Press, Evans announced that the Greene case was being re-opened, big time. The file was disinterred from the cold case stack to the top priority of the Violent Crimes Task Force, a multi-agency effort that includes the FBI, the Michigan State Police, and the Wayne County Sheriffs’ Department. daylite.com, 10/1/09.

“I’m not really comfortable with why (the prior) investigation didn’t continue, why certain things stopped at the time they did,” he said. “There might be valid reasons, but I don’t see them.” He also said: “The community doesn’t buy–whether reality or perception–certain things didn’t happen. I’ve got a responsibility to put that to rest. Because at the end of the day, without the citizen’s support we don’t go anywhere in this city.”

The language may seem a bit tepid, probably because plaintiff’s lawyers were hanging on every word, but the action was strong. And, after all, it is the action that really counts.

At NYC Criminal Defense Law firm we have our Violent Crimes team that conducts pre-trial investigation.