the National Parole Board 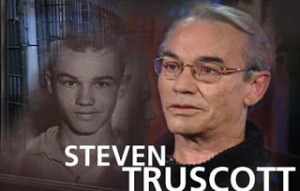 On the outskirts of Clinton, Ontario is a spot where two lives came to an end in the summer of 1959. One person quit breathing. While the other kept breathing, life, as he knew it, came to and end.

Steven Truscott, 14, and Lynne Harper, 12, both were children of Royal Canadian Air Force officers. The two children lived in the same base housing and attended the same school. At home and school, their paths crossed many times. On June 9, 1959 their paths would cross one more time — with tragic results for both.

Truscott gave Harper a ride on his bicycle. The young girl balanced precariously on the handle bars as Truscott pedaled down the gravel road just outside Clinton.

Forty-eight hours later, on June 11, Harper’s body was found just off the road in a small grove known as Lawson’s Bush. She had been raped and strangled. The next day, the Ontario Provincial Police took young Mr. Truscott into custody and questioned him for eight hours. When the police were finished with him, Truscott was charged with Harper’s murder. Despite being just 14, Truscott was ordered, on June 30, to stand trial as an adult.

Three months later, on September 19, Truscott’s trial began in Goderich. A jury in the Supreme Court of Ontario heard the case and found Truscott guilty just two weeks later. Despite the jury’s call for mercy, the law required that Truscott receive the death penalty.

During Truscott’s trial, the prosecutor wove an elaborate tale devoid of any, but circumstantial evidence. The prosecution claimed that young Truscott had originally had a date with a classmate, Jocelyne Gaudet. Convinced that Truscott had planned for a sexual encounter with Gaudet, the prosection claimed that when Truscott’s plan was not realized, the young man set his sights on Harper as a substitute. Finding Harper still on the school grounds, according to the prosectuion, Harper accepted Truscott’s offer of a ride home. When they got to the remote spot, Truscott raped and mudered young Harper before pedlaing back to school. At least that’s what the prosectuion wanted the court to believe.

The government’s case was purely circumstantial and was based on four pieces of evidence:

The defense countered that Truscott and Harper had never stopped at Lawson’s Bush. Instead of taking Harper to the grove, Truscott had given Harper a ride to an intersection and watched as she got into a car that stopped nearby. Two defense witnesses said they had seen the two young people cross the bridge on Highway 8. A third witness said he had seen Truscott return alone across the bridge.

The prosecution’s answer to this testimony? The witnesses were all lying.

In the years following Truscott’s conviction, the case became a cause celebre in the media and in Canada’s parliment. Isabel LeBourdais wrote “The Trial of Steven Truscott” in 1966 and national interest in the affair was rekindled.

In April of that year, the case was sent to the Supreme Court of Canada to aks if it had heard the appeal in 1960, would the court have overturned Truscott’s conviction. A year later, the court said that it certainly would have upheld the conviction.

When Truscott was convicted, he was sent to Goderich, Ontario to wait for his execution. When the penalty was changed to life imprisonment, he was moved first to Kingston Penitentiary and subsquently to the Ontario Training School for Boys in Guelph, Ontario. When Truscott turned 18 in 1963 he was moved again. This time Collins Bay Penitentiary in Kingston, Ontario would be his home for the next six years. He was released on parole in October, 1969. Truscott stayed on parole until 1974 when the National Parole Board released him from all obligations and conditions which parole status had placed on him.

Life after release from prison

The parole board warned Truscott that as an individual convicted of murder, any conviction of any indictable offense would send him back to prison.

Truscott started to live by the name Steven Bowers, his mother’s name, when he was released from prison. Mac Steinberg, Truscott’s parole officer, let Truscott live with him for six months.

Truscott eventually found work as a millright, first with Linread Manufacturing and then Owens Corning.

Truscott had not had any contact with the justice system since being released in 1969.