Argentina and New York each got a wake-up call recently. 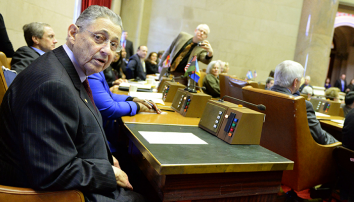 In Argentina, the first anti-Peronist in 70-years has been elected as President while, in New York,  a long-term, state legislator was convicted.

Carlos Menem, a former Argentine President, has been convicted of embezzlement, the same charge brought against Sheldon Silver in New York.

While Peronism was the political machine for seven decades in Argentina, Tammany Hall was its counterpart in New York. Even when Tammany Hall’s power and influence began to wane in the 1960s, vestiges of old school politics still roamed the halls of power.

In Menem’s trial, his attorneys fell back on the tired bromide of “We’ve always done it this way before.”

The political culture of corruption in Albany, New York was waved by the defense in Silver’s trial. Silver, drowning in conflicts of interest while collecting millions in outside income did not make him a criminal — according to his attorneys.

Instead, it just made him a part of the system chosen by New York State.

When Silver was convicted on November 30, a jury tossed out the defense’s argument. Silver, once the owner of the most enduring political careers, came screeching to a humiliating end. Silver was finally stripped of the legislative seat he had held on to since Richard Nixon was in The White House and Abraham Beame was New York City’s mayor.

Government-watchdog groups are expressing optimism that Silver’s conviction will trigger more agress action including the targeting of legislators’ income as well as the so-called L.L.C. loophole that permits huge, unleashed contributions to campaigns.

Advocates are predicting the verdict will have a chilling effect on legislators who previously may have embraced the quid-pro-quo arrangement of doing business. It was the TK that led to Silver’s conviction and downfall.

“There are only two roads forward,” said Attorney General Eric Schneiderman. “More scandals and the further erosion of public trust or real, substantial and meaningful, change that prevents corruption in the first place.”

“With the accusations proven, it is time for legislators to take seriously the need for reform,” said Cuomo in a statement.

The pressure is now on for actions. Calls for the end of ethical lapses will only increase during the winter and spring. Strategists, from both parties, understand that corruption in government will be on the voter’s minds in 2015 when Senate control is up for grabs.

The guilty verdict was unexpected by Silver’s Assembly colleagues. The indictment in January pulled back the curtain and revealed ethical lapses in Silver’s office as speaker. More than a few legislators doutbted he had done anything illegal. Even in the final hours of the trial, legislators thought about how Silver may try to wield power in Albany once more — if he were to be exonerated.

Silver attempted to exude a quiet confidence through the judicial proceedings. He repeatedly told reporters that he would be cleared.

New York Assemblyman, Joseph Lentol, a Brooklyn Democrat and colleague of Silver, was dismayed at the verdict, saying only “It’s a sad day.”

Lentol watched as Silver’s name was removed from the Assembly website and removed from his office door. Reality sunk in and the idea of a Silver-less Assembly took root.

Lentol called it a “body blow” to the Albany chamber. Lentol also said he thought the decision would raise the pressure for campaign finance reform, an idea he supported but admitted would be difficult to implement.

“Money seems to be the root of all evil in politics,” Lentol mused.

Even before the trial, Silver’s name was synonymous with a state government system widely seen as being defined by secrecy and unregulated money.

“The warning for true reform could not any louder in Albany than today,” said noted Criminal Defense Attorney, Arkady Bukh.

Silver’s conviction should be the next step Albany takes toward a less rotten Legislature.

“There is an chance now for a different road,” said Bukh.

When an organization or state fails, it is the leadership that is the cause whether it’s in New York, Argentina or somewhere else.