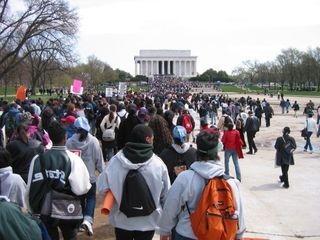 It is reasonable for an officer to “pat frisk” a person in the context of a traffic stop if the officer believes that person is “armed and dangerous,” the United States Supreme Court held today in Arizona v. Johnson.

This might seem to be a pretty common sense opinion. Surely, if we care about the safety of police, it should be reasonable for police to frisk a person who might be armed and dangerous, right?

Well, yes and no. Clearly, officer safety is a serious concern and one that should be adequately addressed by the law.

The problem is, as I’ve noted before, that a continually growing body of drug war jurisprudence defines “armed” and “drug-related” as being virtually synonymous, such that drugs and guns are treated as being like “sharks and remoras” — where you’ve got one, you’ve got the other, or so goes the standard analysis of this issue, which I consider to be empirically unsupported. It was just back in September, for example, that the California Second District Court of Appealheld that it was reasonable in the context of a traffic stop to pat frisk a person who was wearing baggy clothing and smelled like marijuana. The justification given by the court was that “guns often accompany drugs.

(Above: Shark and remora image from scubaduba.com. The photo was taken by Scubaguy, of Manhattan.)

In other words, Johnson is very likely to operate, in practice, as a rule that pat frisks are reasonable in traffic stops any time an officer believes that a person in a car may be engaged in drug crime.  It will also encourage drift of this rule away from the traffic stop context and toward a rule that “armed and dangerous” people (e.g., a young person of color who smells like marijuana and is wearing baggy clothing) may be stopped and frisked at any time. Why, some court will no doubt ask in the future, should officers be any more exposed to the “danger” of drug users in the pedestrian context than they are in the context of traffic stops? And, of course, if there is any basis at all to believe that there is a gang tie, reasonableness will be basically presumed.

The problem with this decision, then, isn’t in the basic idea that officers should be able to protect themselves. The problem is the background of drug law and gang law, which gives police an extremely rich set of facts from which they can “reasonably” conclude that they are in “danger,” even when the only danger they face is the risk that somebody has a bag of marijuana in their sock. Johnson illustrates one of the basic challenges of Fourth Amendment jurisprudence, which is that “reasonableness” drifts according to societal ideas of what is okay, and has consequently eroded almost entirely in the context of drug policing.