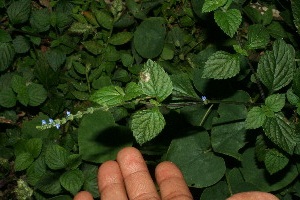 I thought this article from an NBC Atlanta affiliate (entitled “Salvia: A Legal Buzz?”) was going to be about the “buzz” around criminalizing the drug salvia divinorum — which is something that a handful of states have done or are considering.

Instead, it’s almost a commercial for salvia use, talking about the fact that salvia “can get people high,” listing the prices per gram, and quoting some joker at a head shop who says of the drug “Most people take a puff and laugh their butt off.”

As even a casual glance at the salvia experience pages of erowid indicates, salvia can be quite a potent drug, and certainly not one that someone should casually take with the expectation of just “laughing their butt off.”  One of the unfortunate consequences of having a criminal regime to deal with recreational drugs is that it produces the incorrect assumption that anything that’s “legal” must be innocuous. But the reality is just the reverse: many drugs that produce relatively predictable, mellow experiences for people have been criminalized because those are the drugs that everyday people are aware of, use for pleasure, and feel anxious about. Drugs that are still generally legal, like salvia or datura, are a little more obscure, so the democratic majority has never heard of them or has never got around to worrying about them enough to make them illegal. But they’re also more likely to have wide variations in potency, funky side effects or other issues that make them more challenging for the casual user. That’s the paradox of the laws on recreational drugs: they criminalize the substances whose effects are relatively well known and leave unregulated the substances that are more unpredictable and potentially risky.