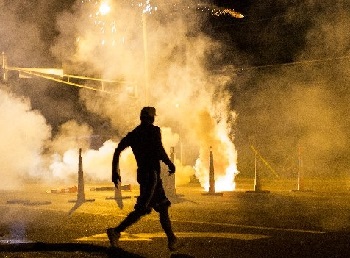 Tear gas was banned by the Geneva Convention from use in international warfare. America may not have gotten the memo.

Several journalists in Ferguson Missouri have reported its use in November 2014 in the midst of the protests following a grand jury’s failure to indict white police officer Darren Wilson in the shooting death of an unarmed black teen, Michael Brown.

The use of tear gas was confirmed, and it was a confirmation that alarmed experts.

Jordt points out that a “decent” body of knowledge exists regarding the short-term effects of exposure to tear gas. Jordt, who was tear-gassed during a protest in the 1980s in German, describes the sensation as being “like cutting an onion, but about 100 times more” serious. The next even is severe pain in the nose and throat along with a boost in production of mucus that obstructs the breathing.

What isn’t know however are the long-term effects of 2-chlorobenzamalononitrile, the main chemical in modern tear gas; a topic Jordt and his colleagues are researching.

The first agents [of tear gas] were developed for use in the First World War as weapons of warfare. The early tear gas used organic compounds in trench warfare and was used along with more deadly gases such as mustard gas.

The tear gas used by law enforcement today is usually CS gas, developed because it is less toxic. Used for clearing wider areas, modern tear gas was recently used tin the Middle East and Turkey on an unprecedented scale. CS gas is being used increasingly in America.

These gases work by activating pain receptors — the pain-sensing nerves in our bodies and the cornea is especially dense with these receptors. When tear gas hits the pain receptors, the body reflexively produces tear secretion and eyelid muscle cramps which cause them to close. These are natural, protective responses of the body to pain and with tear gas, they become greatly exaggerated.

Tear gas triggers rapid inflammatory physiological responses that cause skin and eye inflammation. A victim with a chronic, underlying disease, such as a skin disease, could be affected more and take several days to heal.

In addition to a dearth of research on long-term effects of tear gas, researchers don’t know a great deal about the effects on children, the elderly or people who may have a type of lung disease already.

Most experts have started advocating for other measures to disperse crowds such as sound-blast machines.

Jordt is worried about the continued use of tear gas.

“I’m concerned that as we increase the use of tear gas, it will become normalized. The current attitude now is ‘this is safe, and we can use it as much as we want’.”