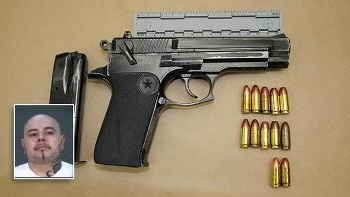 Bronx’s “Number One Enemy” has been captured.

Ruben (Chullo) Pizzano, 23, was caught after a tipster led law enforcement to Pizzaro was wanted in the shooting death of David Rivera, 24, in November. The murder was caught on camera.

Pizzaro and Rivera fought outside a Crotona Avenue day care center. The argument, over a woman, led to Pizzaro blasting Rivera in the stomach, thigh and groin.

It wasn’t the first time Pizzaro had shot Rivera. In 2011, the two came to blows — and shots were fired. In that case, Rivera wouldn’t cooperate with law enforcement. Pizzaro went into hiding.

Pizzaro appeared on the streets on New Year’s Eve as he carjacked a man in Inwood. Pizzaro told the carjacking victim to drive him to the location of a second victim whom Pizzaro shot in the shoulder before stealing a PlayStation 4.

Pizzaro and his gang then holed up in an abandoned house on Kingsbridge Terrace in Marble Hill.

A tipster, responding to a media blitz, point cops to the building where Pizzaro was staying. Law enforcement captured Pizzaro as the felon tried to escape through a back window.

“The city is much safe tonight with him off the streets,” said NYPD Chief of Detectives Robert Boyce.

Pizzaro’s rap sheet includes 30 arrests. Two were for attempted murder. Pizzaro was acquitted in two trials, and the other cases against him failed to move forward because of a lack of victim cooperation.

Avi Moskowitz, Pizzaro’s court-appointed lawyer, told reporters that as Pizzaro was acquitted on gang-related robbery charges, the government would have to prove he is a gang member.

Noted New York Criminal Defense Attorney, Arkady Bukh, says that the biggest gangs in NYC are influenced by the Department of Corrections.

“Since 1993, the Bloods have been the machine in Rikers Island,” said Bukh. “From there, the gangs filter out into the streets. The staying power of the local Blood sets despite the gang sweeps and crackdowns has been remarkable.

Gangs are found in every corner of New York City. This map, based on data from the city’s police department, shows that gang territories overlap as they spread throughout the city.