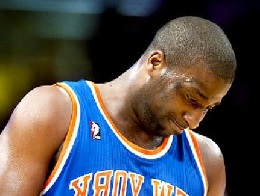 New York Knicks point guard Raymond Felton has been charged with three offenses under New York law for unlawful possession of a firearm. The most serious is second-degree criminal possession, a felony charge that carries a minimum sentence of three and a half years behind bars. Felton’s charges stem from his estranged wife, Ariane Raymondo-Felton, reportedly handing over a Belgian pistol (FNH 5.7×28 mm) to New York police and claiming it belonged to Felton. Raymondo-Felton’s decision to turn over the gun appears connected to a heated argument Felton may have had with his girlfriend, whose name has not been released by law enforcement.

Unfortunately for Felton, New York is probably the worst state to be charged with illegal possession of guns. Prosecutors do not need to establish how Felton obtained the gun or why he possessed the gun, only that he possessed the gun. Felton has thus been charged with a strict liability offense: if he possessed the gun, he’s guilty and a judge would sentence him to at least three and a half years behind bars. Felton could seek a plea deal in hopes of a lesser sentence. Former NFL star Plaxico Burress, who faced similar charges in New York, ultimately pleaded guilty to lesser charges, but it was far from a legal win for Burress. Burress spent nearly two years behind bars. Plus, as discussed below, pleading guilty would carry legal significance for the NBA as it considers suspending Felton, while the Knicks could potentially try to void the remainder of Felton’s deal.

Even if Felton lawfully registered this gun in another state, Felton cannot escape a conviction under New York law. Gun registration is by state, and New York law requires guns entering the state to be registered in New York. Similarly, Felton will not be cleared by arguing that he was simply unaware that possessing this gun was in violation of New York law. Failure to know the law is almost always a losing argument in a criminal case.

A legal defense that could work for Felton is that he did not possess this gun. In order to gain a conviction, prosecutors must establish, beyond a reasonable doubt, that Felton actually possessed the Belgian pistol. This point reveals a crucial difference in evidence between the incidents involving Burress and Felton. While Burress had no logical way of arguing he didn’t possess a gun used to shoot himself, Felton’s connections to the Belgian pistol are less obvious. As of now, the only reported link between Felton and this pistol is that his estranged wife handed the pistol over to law enforcement and claimed it belonged to Felton. If that remains the only link, watch for Felton to portray his estranged wife as unreliable and, given their pending divorced, biased. He may raise similar themes about his alleged girlfriend if she testifies against him.

Prosecutors can establish Felton’s possession in other ways. For instance, if Felton registered the gun in another state, if his fingerprints are on the gun, or if photographs and videos show him with the gun, prosecutors can show a connection between Felton and the gun. Felton’s lawyers, however, can use various devices to attempt to explain away those pieces of evidence. For instance, they may insist any photographs and videos show him with another gun. They may also raise suspicions about how any fingerprints were found on the Belgian gun. Still, his lawyers will have their work cut out for them.

An immediate challenge for Felton is whether he can travel with the Knicks and leave the state of New York while facing the charges. As part of the bail process, Felton will have to convince a judge that he is not a flight risk or a danger to the public, and that he needs to travel with the Knicks in order to fulfill his employment contract. A judge would likely permit him to travel under strict conditions. One game Felton will have trouble playing in is the April 11 matchup against the Toronto Raptors at Air Canada Centre. The Knicks’ legal team will have to convince Canadian immigration officials to permit an employee facing felony charges to enter Canadian soil.

Of even greater concern to Felton is whether he will face an NBA suspension. Recall that then-NBA commissioner David Stern suspended Washington Wizards guard Gilbert Arenas indefinitely in January 2010 after reports surfaced that Arenas brought guns into the Wizards locker room. Arenas would be charged by D.C. police and then pleaded guilty to a felony weapons charge. In March 2010, Stern specified that Arena’s suspension would be for the remainder of the 2009-10 season, costing Arenas 50 games.

New commissioner Adam Silver will face his first major disciplinary decision with Felton. Like Stern, Silver is an attorney and he will likely scrutinize the charges and available evidence before making a decision. Silver will also rely on the counsel of Rick Buchanan, the league’s general counsel and executive vice president. Silver and Buchanan undoubtedly know that the league’s image is tarnished with fans, media and lawmakers when players are connected to guns. On the other hand, they do not want to punish a player who may ultimately be cleared of any wrongdoing. This is a crucial point for Felton as he considers his legal options: if he pleads guilty to any crime, the NBA would be clearly justified in suspending him.

If the NBA suspends Felton for more than 12 games, Felton and the NBA Players’ Association can seek an independent review of the suspension. This is a key distinction between the NBA and NFL’s systems of justice. While NBA players have a right to appeal suspensions to a neutral arbitrator, NFL players do not.

Felton’s greatest worry may be whether the Knicks will use these charges as grounds to void his contract. Felton’s contract calls for him to earn $3.6 million this season, $3.7 million next season and a player option for $4.0 million in 2015-16. Felton is averaging a career-low 10.3 points and his play has drawn much criticism this season, with the gun charges only further hurting his standing with Knicks officials. It stands to reason the Knicks may be interested in severing ties with their point guard all together.

The Knicks could try to terminate Felton’s contract under Clause 16 of the NBA’s Uniform Player Contract. In theory, this clause allows NBA teams to void a contract if a player, “fails, refuses, or neglects to conform his personal conduct to standards of good citizenship, good moral character (defined here to mean not engaging in acts of moral turpitude, whether or not such acts would constitute a crime), and good sportsmanship…” The Knicks would have to first place Felton on waivers. Assuming he clears waivers — a safe bet — the Knicks would then notify Felton that his contract has been voided. To be sure, the Knicks’ legal argument for terminating Felton’s contract would be strengthened if Felton is convicted or if he pleads guilty.

In reality, the Knicks would be inviting a legal fight if they tried to void Felton’s contract. Any attempt would be met with a grievance filed by the players’ association to a neutral arbitrator. Keep in mind, an arbitrator prevented the Golden State Warriors from terminating Latrell Sprewell’s contract even after he chocked his coach, P.J. Carlesimo. The Celtics were also unable to void Vin Baker’s contract in 2004, despite apparently compelling evidence his drinking problems prevented him from working. The Celtics ultimately worked out a buyout with Baker, where he would receive a little less than half of the remainder of his $35 million contract. Perhaps the Knicks can try to accomplish the same with Felton and negotiate a buyout.