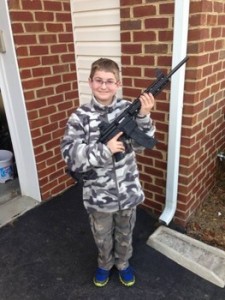 Take an overreaching child and family services agency add in an overly aggressive police department, and you have the ingredients for a disaster.

When Shawn Moore took a photo of his 11-year old son holding his birthday present, a .22 caliber tactical rifle, he never thought he had started a chain of events that could have torn his family apart at best and ended up deadly at worst.

On a chilly Saturday night in March 2013, Moore was out with friends. His wife sent him a text that would haunt both parents for months. She contacted him to let him know that an agent with the Division of Child Protection and Permanency, formerly called Department of Youth and Family Services, had come to the house. She was flanked by four local police officers.

Apparently in the Garden State, posting a picture of a youth holding a weapon is grounds for searching private property.

Moore jumped in his truck and called his defense attorney, Evan Nappen, as he drove. Nappen has been a central figure in multiple Gun Rights Examiner cases over the years. Moore walked into his home, handed his cellphone to the cops and told them to go outside.

“Child Protection received a call because of an image of my son holding a gun,” Moore told reporters. “They wanted to look around and check my guns to make sure they were registered.”

“The police tried to pressure me to open my safe,” Moore said. “They didn’t have a warrant, no charges, nothing. I didn’t move.”

Law enforcement authorities accused Moore of acting suspiciously and told him they would get a search warrant. Moore told them to go ahead and do it. When Moore tried to get the child services worker’s name, she refused to give her name as well as her credentials.

“A minor son possessing a gun under the supervision of his dad is legal,” Nappen told authorities

“People, it can happen just that fast,” Moore told forum participants. “Most wouldn’t have stood up to them.”

Until more individuals do take a stand, bureaucrats and enforcers will continue to act like our function is to serve them.

What are your thoughts? Did child services go too far? If you were in Moore’s position, how would you have reacted to the demands?