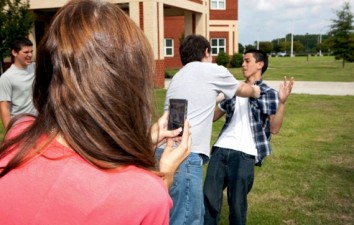 Dan Pearce, author of Single Dad Laughing, writes, “People who love themselves don’t hurt other people. The more we hate ourselves, the more we want others to suffer.” In other words, bullies are hurt people who hurt people.

Possibly, the most overused word in education is “bullying”. The word has also become overused in the workplace where too many prima donnas are treated in the manner in which they demand to be treated.

People toss it around, and an accusation can be made with no proof whatsoever.

Every accidental bump, look or comment gets labeled as bullying, and we are losing the right to simply not like another person.

Although genuine bullying is terrible and should not be tolerated — ever — maintaining bullying is occurring in every circumstance that doesn’t go our direction is also perverted, wrong and ego-centric.

Not every fifth-grader who doesn’t get to be first in line — or join their buddies’ team — is being bullied. Simply because somebody doesn’t speak to someone at the office coffee pot, well, that doesn’t make them a tormentor either.

Yes, bullying behavior was tolerated for way too long and then someone decided it needed to stop. But, as typical, our society has gone overboard.

Anthony Pellegrini, a University of Minnesota psychologist, writes in Time Magazine that adults aren’t very good at distinguishing play-fighting from aggression – children are better at this. But it is all children that suffer when adults take away recess in a misguided attempt to reduce bullying.

Pampered adults often mistake bullying for rudeness at their own level of development as well.

When somebody butts in front of me on the expressway or steals my parking place, they may be a bully; more likely, though, they are just a jerk.

Bullying is simply the repetitive, and intentional, abuse of dominance.

It is understandable that kids may not know the distinction separating a planned and accidental act. What is sad, is that most adults talk about the things others do as if the acts were deliberate. This perception is dangerous. The trivial act of disagreement, performed without any intent to harm, may intensify and turn into a major battle.

Just as in any conversation, there are two points of view. Bullying is a type of communication. It is dependent, not only on the giver, but the subject. To view an occurrence as bullying, the offender must want to harm somebody, and the sufferer must see the occurrence as an intentional act of harm.

These incidents are NOT deemed bullying:

It is normal that people won’t like everybody around them. As uncomfortable as it can be, it is NOT bullying to get, spoken and non-spoken, communication that someone doesn’t like you.

It is normal for individuals to gather a collection of friends. We can’t be buddies with everybody, so it is normal that when youngsters have a party, they will include some and not others. It is vital to remind them they do the very thing occasionally as well.

When someone bumps into another, the response will depend on the jarred person’s attitude. If they are having an off day, they take it as an aggressive act. If they are in a happy mood, they will smile and get an apology.

Making light of other persons may not be amusing to them, but the line separating having a touch of playfulness and making fun of a person is very narrow. It is essential to show youngsters — and grownups — that what they say as fun should also be enjoyable to others. If it doesn’t then quit.

The meaning of bullying states there is a recurrence of the behavior. Bullying is an intentional, repeated aggressive behavior. Anything that occurs once is NOT an act of bullying.

Often, mislabeling a single act of aggression can turn it into bullying just by the warped perception of the person on the receiving end.