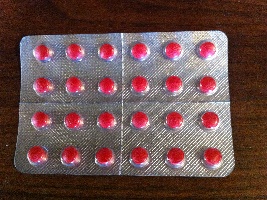 A man who was found with 178 pounds of pseudo ephedrine pills was properly convicted of possessing the pills with intent to manufacture methamphetamine even though the state did not establish that the defendant knew what the pills were, the Ninth Circuit held July 14 in U.S. v. Estrada, No. 05-10500.

Estrada claimed that a jury instruction violated his rights by making it possible to convict him under 21 U.S.C. § 841(c)(2) (possessing a listed chemical knowing, or with reasonable cause to believe, that it would be used to manufacture a controlled substance) without showing that he knew the pills to be pseudoephedrine. As the court notes, this case is somewhat similar to  U.S. v. Lo, 447 F.3d 1212 (9th Cir. 2006), in which Lo faced charges of possession of the chemical MDP-2-P (a precursor to MDMA, as explained in this page from Erowid). In Lo, the defendant focused on the word “knowing” in the statute: he claimed that he knowingly possessed the chemical but did not know that it was a “listed” chemical, and argued that the word “knowing” applied both to the possession and to an awareness of what was being possessed. In Estrada, on the other hand, Estrada, didn’t claim ignorance of the “listed” nature of pseudoephedrine, but he argued the state had the obligation to show that he knew the pills to contain that listed chemical.

As in Lo, though, the court rejected the defendant’s argument because it would “import a second mens rea requirement into the statute: knowledge or reasonable cause to believe that the substance will be used in the manufacture of a controlled substance plus knowledge of the identity of the specific substance possessed.”

(A somewhat related Ninth Circuit case, addressing the issue whether a chemical is “listed” when mixed with other innocuous substances, is U.S. v. Tang, decided in May 2006 and discussed)