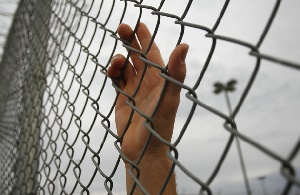 When Byron Halsey stepped into the sunshine in May 2007, he had served over twenty years in prison for atrocities he admitted to – but didn’t commit.

Prosecutors were quick to admit their office’s failings and said they would not retry Halsey for the rape and murder of two children. DNA testing exonerated Halsey and prosecutors tossed out his convictions. New DNA testing methods, not available 22-years before, connected a neighbor to the crimes. The new test indicated that a next-door-neighbor in the rooming house was the source of semen found at the scene and was responsible for the crimes.

The neighbor, Clifton Hall, was subsequently charged with two counts of murder and sexual assault.

Until that May afternoon, Halsey could have been retried. The new charges would have included sexual assault, aggravated manslaughter, and felony murder. The prosecutor’s suggested — and the judge agreed — that all charges be dropped.

Living in a Plainfield, New Jersey, rooming house with his girlfriend and her two children, Halsey had been convicted in 1988 of sexually assaulting the children before murdering them.

Halsey is now having a challenge readjusting to life outside as he pieces his life together. Halsey moved to Newark and went to work with a sign company. He met with social workers as he adjusted to his new life.

“He wanted his freedom back,” said Vanessa Potkin, an attorney with the Innocence Project affiliated with Cardozo School of Law.

“He jumped back into things and started working. He rebuilt his life, piece by piece,” she said.

Halsey had confessed before trial, but Barry Scheck, the Innocence Project co-director pointing out the admission came after 30-hours of interrogation.

Based on his confession, the jury gave Halsey two life-terms — plus 20-years.

What would make an innocent person confess to committing murder? Halsey’s case is typical: a scared young man coerced by cops into giving accounts whose consequences he failed to comprehend.

If the last several years have shown anything, it’s that bogus declarations are not just possible — they occur more frequently than anybody would assume.

This story of three naive midwestern men shows how police can — following hours of interrogation — manage and obtain a false story.

The movie explores the 1989 crime where five black and Hispanic teens were sentenced for raping and bashing a 28-year old jogger in New York City’s Central Park. All five convictions were thrown out in 2002 following a confession by a killer and serial rapist.

Despite increased awareness, it is still challenging to repeal a conviction based on a confession. It boils down to retrying the entire case and fighting the declaration and indirect evidence accepted in court to convict.

Over the past decades, DNA data has shown, in conspicuous terms, that the criminal justice system does make mistakes and that incorrect people are often convicted. False confessions may be the hardest subset of the cases, but the courts are beginning to realize that greater caution about how confessions are used in court is needed