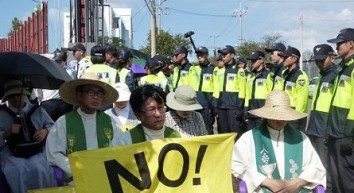 I am an American, but I have lived and worked in South Korea as an ESL teacher for the past ten years. America has a few military bases set up throughout Korea, which causes concern and problems throughout the peninsula. Some of the old timers claim that the American military presence is necessary due to the ceasefire still on with their neighbor to the north. The two Koreas are still technically at war, but the US military presence is a big issue in Korea still to this day.

When I first came to Korea, it was on the heels of the Shin Mi-Suen (신효 순) and Shim Mi-Suen (심미선) incident where a negligence on the US military’s part led to the death of those two middle school girls. And, since then, the view of US soldiers in Korea has not been the best, partially (or mainly) due to the drunken brawls, drug use, and sex crimes of some of the soldiers.

And recently, there are plans to build a joint U.S./ROK naval base on the beautiful island of Jeju (제주도). This small island off the southern coast of Korea holds strong pride for the Korean people and UNESCO’s World Heritage Committee has labeled the Jeju Volcanic Island and Lava Tubes as a World Natural Heritage. The whole island is very beautiful and there are Korean fishing villages there that have been the same for many generations.

The construction of the Jeju naval base has met with numerous protests. The residents of the Gangjeong (강정), a small fishing village of about 2,000 people, have already suffered by the construction and the landscape is being destroyed, like the sacred rocky Gureombi (구럼비) coastline and the endangered coral forests. There is a rich and traditional culture subset on Jeju, and the island still remains as Korea’s top tourism spot.

Yang Yeook (양여옥), Choi Jungmin (최정민) (both activists of World Without War), and Reverend Im Bora (임보라) of Hyanglin Church were all arrested for ‘civil disobedience’ and fined a few thousand dollars each for their involvement in the protests. All three refused to pay the fines and were subsequently imprisoned. Yang, Choi, and Im claim that the building of the naval base is wrong and their imprisonment is in direct opposition to the Korean constitution and the Korean peoples’ right to assembly.

War Resister’s International has taken up their cause, helping with letters of support and fundraising. Petitions have been started to have the three activists released, and this has brought more attention on the problem of destroying part of a beautiful island to build a naval base. The Veterans for Peace have also taken up the cause against the base and in support of Yang, Choi, and Im.

The protestors (along with the three activists) see this naval base as just a ploy by Obama to build up a defense against China. This is also confirmed by the U.S. military expansion in Japan. Whatever the reason for such a base,
Yang, Choi, and Im have kept up the fight against the construction and have brought the attention of numerous activist groups on the naval base construction.

Such wonderful, natural scenery being destroyed by a naval base.