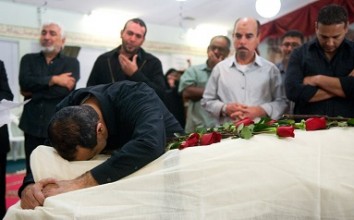 Monday afternoon, New York police arrested Oscar Morel, 35, for murder in connection with the daytime shooting deaths of an imam and his companion as they strolled from a New York City mosque.

Morel was charged with two counts of murder and two counts of criminal possession of a weapon. Law enforcement wasn’t sure if Morel had an attorney as of late Monday evening.

Ten minutes after Morel allegedly murdered the two men, he hit a bicyclist with his SUV.

Morel was arrested outside an apartment in Brooklyn when law enforcement said they recovered a revolver at his home and clothes similar to the ones worn in a surveillance video that revealed the gunman.

About 1,000 people gathered to praise the two dead men. Emotions were at a peak during the Islamic funeral service which featured several speakers who said they feel the victims were marked for execution because of their religion.

When the ceremony ended, many in the crowd went to the place where the shooting took place. New York’s Mayor, Bill de Blasio, told the people gathered that the entire city was mourning.

Police have not announced a reason for the killings, although they did allude to the likelihood that it was a hate crime. Some in the largely Bangladeshi Muslim neighborhood in Queens and Brooklyn have described harassment lately by people who yelled anti-Muslim slurs.

What Is Hate Crime?

Simply put, a hate crime is a violation driven by ethnic, sexual or other intolerance and often includes violence.

Wikipedia defines hate crime as a prejudice-motivated crime, often violent, which occurs when a perpetrator targets a victim because of his or her membership in a particular social group.

While hate crimes laws have been about in America for nearly 150 years, the term, “hate crime”, first evolved into popular use in 1980s America, “Hate crime” is also applied in retrospect to events occurring before then. The Nazi’s slaughter of Jews and Rome’s persecution of Christians are two examples.

Before 9/11, the preponderance of victims of hate crimes was Jewish — 65 percent, Hispanic — 15 percent and African American — 13 percent.