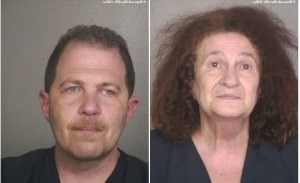 Deputies have arrested a mother and son duo, accused of stealing over $2 million worth of merchandise from toy stores across the country.

Margaret Pollara, 70, and her son Michael Pollara, 47, were arrested Thursday.

Investigators said Michael has stolen toys from Toys “R” Us from almost 50 states. “He made it a goal of his to steal from all 50 states within one year,” said Broward Sheriff’s Office Sergeant Rich Rossman.

According to detectives, Michael would bring his stolen merchandise to his Tamarac home and then sell it on the Internet. “He was proud of it. This is his job. I go to work with the Sheriff’s Office, he goes to work and steals,” said Rossman.

The money earned from the stolen goods funded his world travels. “He was due to leave Tuesday. He was going to Australia,” said Rossman.

After weeks of tracking Michael, deputies arrested him and his mother, Margaret. Investigators said she would help her son steal at Toys “R” Us stores in South Florida.

Michael was caught on surveillance video inside a Toys “R” Us with another suspect working for him. Police want to arrest the third person involved.

Michael alone has stolen more than $2 million worth of toys from various Toys “R” Us and other stores. “He’s been stealing like this every day for 10 years. For 10 years this is what he’s done,” said Rossman.

Both mother and son appeared in court on Friday.

Deputies said when they were interviewing Michael, he wanted to thank CVS for funding his Hawaii trip.