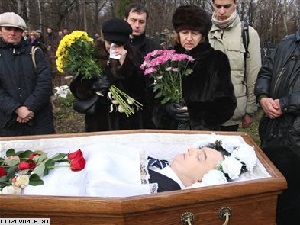 Nationalist lovers Nikita Tikhonov and Yevgeniya Khasis are guilty as charged. A divided jury eventually gave the slimmest possible majority verdict, with seven of the 12 finding the pair guilty

After being sent back to the jury room to clarify their thoughts the jurors returned to the courtroom a second time late on Thursday night to pass judgment and recommend that the accused saw no mercy.

Tikhonov could now face life behind bars and Khasis 20 years.

Discord in the ranks

Over their three-month trial Tikhonov and Khasis had won some supporters in the jury and they were condemned by only clincher vote. Seven members of the jury voted against the defendants and five voted for them. A hung jury would have meant freedom for the pair.

Controversy dogged the case until the very last stages, with juror Anna Dobrachyova pulling out in the eleventh hour, citing pressure on the jury to produce a guilty verdict.

And there were logical inconsistencies in the answers the jury gave to the judge’s 21 questions.

Only seven decided that the lovers were implicated in the murder but eight decided they were guilty. The implication being that one person was not convinced by the prosecution’s arguments but nonetheless thought that the defendants were guilty, RIA Novosti reported.

“I do not see any violations of logic here. The verdict is in and we have no right to discuss its merits,” state prosecutor Loktionov said about the discrepancy, RIA Novosti reported.

The defence intend to lodge an appeal

In defence of nationalists

Stanislav Markelov was shot twice in the head on Prechistenka Ulitsa in 2009 as he came from a press conference where he had been giving his thoughts on the issue of parole for Col. Yury Budanov, who had been convicted of the murder of Chechen Elza Kungayeva. Markelov was representing her parents, gzt.ru reported.

Khasis had been in waiting for nearly an hour, ready for Markelov to appear on the street. As he emerged she gave the signal and Tikhonov walked past the victims before firing. Baburova, a reporter with Novaya Gazeta, was a witness and so she too met her death.

The murder weapon, a 1910 Browning, was found in Tikhonov’s flat. Tikhonov said he had been looking after the weapon for his friend Ilya Goryachev.

The flat had been bugged and recordings show that they discussed Markelov’s murder and thought they would be able to pin the blame on law enforcement.

This was something that Khasis and Tikhonov kept up throughout the trial, saying that they were convenient scapegoats.

But the court heard testimony from 20 witnesses, including Goryachev. He tried to withdraw his testimony, saying he had been under pressure from prosecutors. But the judge ruled that he could not as he was not there to defend his decision. He had fled the country. Tikhonov had likewise earlier confessed, but he also withdrew his confession.

Two witnesses identified Tikhonov as the murderer and one identified Khasis as “the nice girl” who was “acting strangely” and standing across the street from the crime scene.