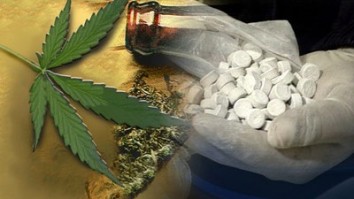 The Strokes’ most infamous song, “New York City Cops” was pulled from America’s release of “Is This It” because of one line:

They ain’t too smart.”

The song is hardly the incendiary piece of anti-authoritarian polemic it was made out to be, and the line about New York cops could easily be applied to law enforcement across the country.

When a Macon, Georgia, police officer was arrested on drug charges in 2013, she was not the only cop that wasn’t “too smart.”

The city’s newspaper, The Telegraph, reported that 27-year old Kontrina Toomer was the fifth police officer to be arrested in the town in 2013.

Police say Toomer was arrested following a raid at her home which turned up 11 ounces of pot pre-packaged for sale.

When Toomer was charged with possession, internal affairs officers took her gun and badge.

Eleven ounces, pre-packaged, shows Toomer was contemplating a crime, but it was small potatoes compared to some other law enforcement personnel who had decided to take a walk on the wild side.

The amount paled compared to a haul in Pennsylvania — also by a cop.

Busted with $2 Million in Pot

A California police officer was busted in January 2016 after driving almost 250 pounds of pot from home in Yuba County, California to York, Pennsylvania in two pickup trucks load with pot with a street value over $2 million.

Christopher Heath was on vacation when he was arrested along with two other men as they carried the  the marijuana sealed in vacuum-packed bags.

The case is interesting because Heath was an officer on the Yuba County’s narcotics task force. His job description meant he was responsible for putting nonviolent people in prison for using, and selling, drugs. At the same time, Heath was selling drugs and being active in the same sort of behavior for which he locked up people.

While the mood of the country is shifting towards pot, observers feel that those who would lock up morally upright people for owning a plant are bad enough. It takes a unique person to destroy the lives of countless persons while perpetrating comparable acts.

Other officers don’t go to all the trouble of driving cross-country to get busted for marijuana. Some just walk into the evidence room.

In February 2016, a Texas border police chief was formally arrested in connection with pot that was stolen from the department’s evidence locker.

On February 2, Sullivan Police Chief Miguel Angel Martinez appeared before a judge who unsealed an indictment and charged the chief with one count of theft by a public servant and two counts of abuse of official capacity.

The charges stem from a May 2015 incident in Sullivan, a small border city that has become one of the main corridors used by the Gulf Cartel for smuggling. Local law enforcement is responsible for multi-ton seizures of marijuana on a regular basis. The drug-running has resulted in a revolving door where several police officers have been caught in illegal activity.

While there are no accurate, recent, figures for the number of law enforcement personnel found with their fingers in the cookie jar, so to speak, the latest data from federal agencies point to a high number of arrests despite the nation’s changing mood.

Law enforcement made just over 700,000 arrests on pot-related charges in 2014 according to information released by the Federal Bureau of Investigation. Of that amount, over 88% were made for marijuana possession alone, resulting in a rate of arrests of one every 51 seconds — for the entire year.

“It isn’t acceptable that policemen put this many people in handcuffs for anything that an increasing majority of Americans believe should be defended,” Angell said.

It also isn’t acceptable that policemen should engage in the very acts for which they lock up civilians.