The former head of an Evansville-based company that tried to introduce a currency that competed with the U.S. dollar has been found guilty of federal charges in North Carolina.

Bernard von NotHaus, 67, was convicted Friday by a federal jury of making, possessing and selling his own coins, said Anne M. Tompkins, U.S. attorney for the Western District of North Carolina. 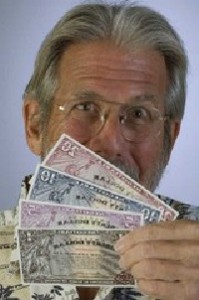 The guilty verdict concluded an investigation that began in 2005 and involved the minting of Liberty Dollar coins with a current value of about $7 million.

Von NotHaus developed the liberty dollar in 1998 as an “inflation-proof” alternative currency to the U.S. dollar, which he claimed has devalued since the Federal Reserve was established in 1913.

The silver medallions were produced by a private mint in Idaho on behalf of Evansville-based Liberty Services, which also issued paper notes the group said were backed by silver reserves.

During the raid, about a dozen agents seized nearly two tons of coins that featured the image of Ron Paul, a Texas congressman. They also took about 500 pounds of silver and 40 to 50 ounces of gold, as was paper currency and other metals.

The 2007 raid was a development in a dispute between von NotHaus and the U.S. government. In a federal suit filed in March 2007 in U.S. District Court in Evansville, von NotHaus sought a permanent injunction against the federal government to force it to stop referring to the Liberty Dollar as an illegal currency and to require the removal of a warning from the U.S. Mint’s website stating that use of the Liberty Dollar violates federal law.

The suit was triggered by a public warning issued by the U.S. Mint in September 2006. The warning informed Liberty Dollar users that federal prosecutors had determined circulation of the medallions is a federal crime.

According to federal prosecutors, Liberty coins were marked with the dollar sign; the words “dollar,” “USA,” “Liberty,” “Trust in God” (instead of “In God We Trust”); and other features associated with legitimate U.S. coins.

Prosecutors claimed von Not-Haus and Liberty Services had since 1998 been issuing, disseminating and placing into circulation the Liberty Dollar in all its forms throughout the United States and Puerto Rico. The goal was to compete with United States currency.

The United States is seeking the forfeiture of about 16,000 pounds of Liberty Dollar coins and precious metals, valued at nearly $7 million. The forfeiture trial, which began Friday before U.S. District Court Judge Richard Voorhees, will resume April 4 in the federal court in Statesville, N.C.

Voorhees has not yet set a date for von NotHaus’ sentencing.