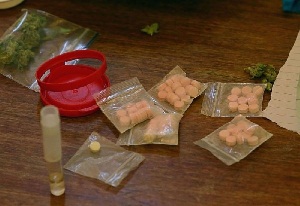 The LA Times ran a rather frustrating editorial this weekend on the ACLU and Students for Sensible Drug Policy’s lawsuit challenging the denial of federal financial aid to individuals with drug convictions.

The last three graphs, in particular, left me scratching my head

The ACLU is going down the wrong path with a lawsuit against the drug amendment. It claims the law unfairly punishes poor and minority students, who are more likely to need college aid in the first place. But almost any restriction on federal funds has a disproportionate effect on the poor, and minority and needy students are as capable as anyone else of refraining from drug use.

The stronger argument against the Souder amendment is that it’s simply bad lawmaking — ineffective at achieving its aims and inconsistent in its approach. Its only result has been to bar more people from college, and that doesn’t help a nation that needs all the college-educated young people it can get to compete in the global marketplace.

As Congress considers the reauthorization of the Higher Education Act, it should eliminate this amendment, or at least revise it to affect only students who are convicted of a felony — any felony. Laws should be fair and consistent. It doesn’t take a college education to see that.

Huh? We should expand this “bad” and “ineffective” law to allfelonies? And that will help us how, exactly, as we “compete in the global marketplace”?

The idea that the ACLU and SSDP are “going down the wrong path” by litigating is also rather ironic. Whatever one may think of the legal merits of the case (and I too have my doubts, as noted previously), the reality is that the LA Times is only writing about this issue because the lawsuit was filed. It’s called lawsuit-as-“news hook”-and-debate-stimulator, which isn’t always the same thing as lawsuit-as-mechanism-for-court-victory, as the author of the editorial surely understands.

Finally, the piece carries the juvenile and condescending title “Dude, Where’s My Loan?” Note to editors and journalists who cover drug issues: it isn’t always necessary to invoke a tired stereotype when writing about drug policy. The next time you think you’re being clever by using “dude” in a headline or by throwing in any text along the lines of “they must have beenhigh when they did xyz” or “what were they smoking when they came up with xyz,” try doing a Lexis search first (see below). Passages involving “Dude, Where’s My XYZ” have only been used about 2,000 times in the last two years, unlike the “what were they smoking” trope, which seems to been a really evergreen cliche. But even so, there might perhaps be more original and less inane ways to deal with these issues.