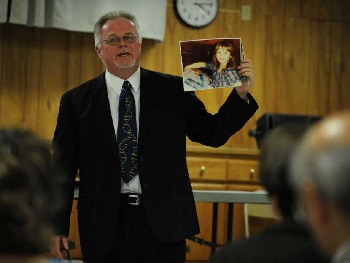 Kirk Noble Bloodsworth, a former Marine discus champion, was exonerated byDNA in 1993 of the rape and murder of nine-year-old Dawn Hamilton — a crime for which he was sentenced to death in Baltimore County, Maryland, in 1985. After Bloodsworth’s conviction was reversed in 1986, he occupied a cell directly above that occupied by Kimberly Shay Ruffner, who was serving a sentence for another rape and who — a decade after Bloodsworth’s exoneration — would be linked by DNA to the rape and murder of the Hamilton child.

The principal evidence purporting to link Bloodsworth to the 1984 crime was the testimony of five witnesses who placed him either with the victim or near the scene of the crime at the time it was believed to have occurred. In addition, the prosecution introduced forensic evidence purporting to link a pair of his shoes to marks on the victim’s body.

In 1992, however, Centurion Ministries of Princeton, New Jersey, helped Bloodsworth obtain court approval for testing of biological material preserved from the crime with a then-emerging DNA technology known as PCR (polymerase chain reaction). The tests, performed by Edward T. Blake, of Forensic Science Associates, in Richmond, California, incontrovertibly established Bloodsworth’s innocence. After the FBI confirmed the results, Bloodsworth was released June 28, 1993. He was the first U.S. death row prisoner to be exonerated by DNA. In December 1994, Maryland Governor William Donald Schaefer granted Boodsworth a full pardon based on innocence.

Nine years later, in the spring of 2003, a Baltimore County forensic biologist who was studying evidence from the case found stains on a sheet that had not been analyzed. Investigators ordered DNA testing and ran the results through the national DNA database, which linked Ruffner to the crime. Bloodsworth, who had been the prison librarian in his later years of incarceration, had regularly delivered books to Ruffner and the two had lifted weights together. Ruffner arrived in prison just a month after Bloodsworth and knew about Bloodsworth’s case, his attempts to win a new trial, and his claim of actual innocence. However, Ruffner said nothing to lead Bloodsworth to suspect that Ruffner had killed Dawn Hamilton. Bloodsworth learned the news from prosecutors shortly before Ruffner was formally charged with the crime on September 5, 2003.

The State of Maryland paid Bloodsworth $300,000 for lost income, based on the rough calculation that he would have earned some $30,000 a year for the years from his arrest to his release.

The foregoing summary was prepared by Rob Warden, executive director of the Center on Wrongful Convictions. Permission is granted to reprint, quote, or post this material on other web sites with appropriate attribution.