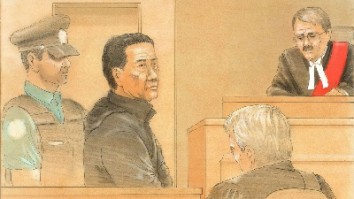 Tung Sheng Wu
, also known as David Wu, spent months on the run as he defied a court order not to practice dentistry illegally.

Wu had previously agreed to stop practicing dentistry after receiving a court order to cease.

While Wu was on the run, a BC Supreme Court sentenced him in absentia to 90 days in jail and ordered Wu to pay back the dental college for its investigation costs.

In August the same year, a nation-wide warrant was issued. The warrant was joined by a $2000 reward from the dental college. The unlicensed dentist eventually surrendered to law enforcement in Toronto.

Associate Chief Justice Austin Cullen was considering the public when he sentenced Wu. “His conduct is grave as it implicates the health of the public,” Cullen added that a 90-day sentence was appropriate as there was evidence the 62-year old was planning to move his practice.

At the time, college registrar, Jerome Marburg, said that he was satisfied that Wu will be off the streets.

“If you’re going to do things that harm people in Canada, we won’t stand for that,” Marburg said.

Marburg estimates that the school spent over $150,000 in bringing Wu to justice.

Wu did not speak in court except to ask for an interpreter. Law enforcement officers still aren’t sure why Wu turned himself in, but the dental school’s lawyer, Brent Olthuis, said he thinks Wu may have gotten himself into a corner from which there was no escape.”

“I think that Wu found himself in Toronto without his supplies and passport. He had nowhere else to run,” Olthuis said. “I think he eventually felt the pressure and just decided to end the charade.”

When the Royal Canadian Mounted Police teamed up with the College of Dental Surgeons and raided the home office of David “Tung Sheng” Wu in May 2013, there wasn’t much of a dental practice. Tucked into a converted bedroom, investigators found a dental chair some dental equipment scattered around and a decades-old autoclave.

The level of hygiene at Wu’s dental practice was suspect as the investigators for the College of Surgeons found none of the records required to ensure instruments and material were properly sterilized.

The Fraser Health Authority advised each of Wu’s 1500 patients to be tested for Hepatitis B and C as well as HIV. So far, none of Wu’s patients have tested positive for infection. Wu had been banned from dental medicine in 2003