The New York Times has news of an American milestone:

For the first time in the nation’s history, more than one in 100 American adults is behind bars. 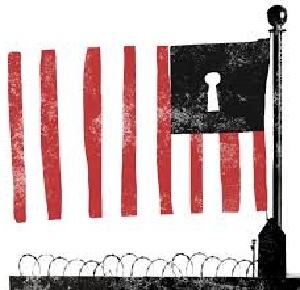 It’s one thing to be tough on crime, and another to give the thumbs-up to a justice system that often treats black and Hispanic offenders much worse than white ones, and that will dole out long prison sentences to non-violent felons who’ve done nothing worse than distribute plants to medical-marijuana dispensaries (to name but two outrages).

The incarceration rate in the U.S. is world-leading. Take a look at this three-year-old chart from the Bureau of Justice Statistics, courtesy of Crooked Timber. That blue dot representing the United States is now even further to the right — literally off the scale.

This is what happens when politicians, law enforcement, and the judiciary sign off on escalating drug wars, on police militarization, and on the most draconian of minimum-sentencing guidelines.

Astonishingly, none of this is up for discussion in political circles anymore. I can’t remember a single press question about crime rates and incarceration stats in the presidential race so far, let alone an occasion when any of the candidates, of their own volition, had something substantive to say about the issue.

I would like to suggest two simple questions for the press corps:

1. Senator, do you believe that the American people are easily two to four times more likely to engage in serious crime than citizens of any other country?

Protestations would inevitably follow, as we all know that the American people are upstanding, hard-working, God-fearing, and likely to call home on Mother’s Day.

Time for the followup:

2. If you reject the notion that Americans are much more criminally inclined than citizens of other nations, then why does our country hold the world record in putting people in prison, a policy that takes an astronomical social and fiscal toll — and what do you propose to do about it?

Icy days in hell are rare, and it’ll probably take an arctic spell down there before the topic of our national incarceration rate emerges as a legitimate topic on the Hill and on the campaign trail. But one can hope.