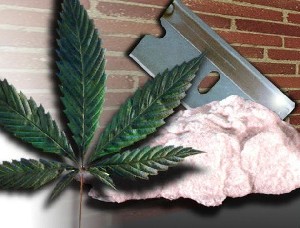 Drug policy is a complicated issue. Is there anything anybody can say in 100 words that would make you change your mind about the way we deal with drugs? Here’s my stab at it. What’s yours?

I believe that America needs to change the way it deals with drugs.

The war on drugs has made America the biggest incarcerator in the entire world.

It has put a lot of poor people and minorities in prison.

It has created a vast black market in illegal drugs, fueling gang violence and corruption.

It has eroded basic constitutional rights.

It has probably discouraged drug use, but America leads the world in onsumption of marijuana and cocaine.

Drugs can be effectively regulated without using criminal law as the primary tool for control.

I believe the time to change is now.

Links to the studies and posts that support each assertion are on the jump. In fact, this post is a by-product of compiling a bunch of different studies on this subject, realizing how complex things are, and thinking that it might be helpful to state, in a very simple way, what all this stuff ultimately means (in my opinion).