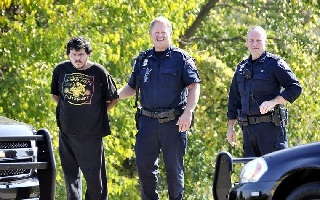 Man Steals Hearse for a Joy Ride, Finds Out Later a Corpse Came Along

It’s a bad weekend when a family member dies. It only gets worse when the funeral home calls you later to say their hearse was stolen — and your loved one’s body was inside.

Maybe the only one having a worse day was the culprit who stole the hearse with the body. Law enforcement told Atlanta reporters, “We believe the perpetrator had mental problems.”

In June, Henry Lyles, 34 was arrested just outside of Atlanta on two counts of hijacking a motor vehicle. The theft happened when a funeral home employee went to Grady Memorial Hospital to pick up a body.

While the funeral home worker started to enter the hearse, with the body in the back, Lyles approached him, snatched his keys and then pushed the startled employee into the vehicle and drove off — with the body inside.

Crashing through the hospital’s locked security gates, it got away — for a while. Later, law enforcement received a call from a man who reported his truck had been stolen just blocks from the hospital. The driver told cops a man approached him and ordered him out of his car.

Police later recovered the hearse — with the body inside — and Lyles was arrested. Held without Bond, it wasn’t clear if he had an attorney.

How to respond to a hearse hijacking was not covered in the funeral home’s policy and procedure manual.

“None of us ever fathomed the idea of someone taking a hearse,” Darrell Watkins, the funeral director said. “I was happy to be able to tell the family later that the remains had been retrieved.”

Watkins admitted it was tough breaking the news to the deceased man’s family that the body of their loved one was stolen.