Mike from Satan’s Laundromat gets arrested 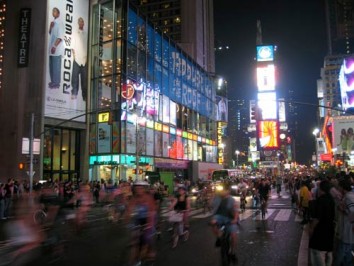 On August 27, 2004, approximately 5,000 bicyclists met in Union Square Park for the kick off of that month’s “Critical Mass” ride through the streets of Manhattan.

Police arrested over 250 people who were held in lock-up for 24-hours — some longer.

The majority of the detained were accused of disorderly conduct and taken to Pier 57, a three-story, block-long pier that the city had turned to a holding corral for people protesting the Republican National Convention.

Sarah Turner, a cyclist, was at the intersection of Second Avenue and 10th Street. The observed the cops arriving in a procession of motorcycles. The mounted police began shoving the bikes, and the bikers began shoving back according to Turner. One man got caught under his bicycle, as the police mobbed him. 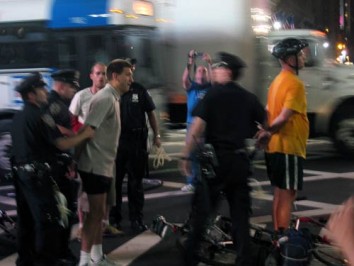 Turner watched as one officer angrily forced his face into the pavement and held him there with a knee on his back. As protesters started shouting, “Let him go. Let him go.” The police began waving their batons and swung at the protesters.

Turner said the protester began chanting, “The whole world is watching” as one law enforcement officer pulled out his pepper spray and yelled, “Move back, or everyone will get sprayed.”

What is Critical Mass

Critical Mass is a cycling meet usually held on the last Friday of each month. The event began in 1992 in San Francisco and by the end of 2013 over 300 cities globally saw Critical Mass events.

Described as “monthly political-protest rides,” participants have said the events should be viewed more as “celebrations and not as protests or organized demonstrations. Law enforcement authorities in New York have often expressed concern with the challenge of coordinating with the riders because of the lack of centralized leadership.

The rides vary in frequency and number of cyclists. Many small cities have trips with fewer than twenty participants. Budapest estimates its participation at over 80,000. 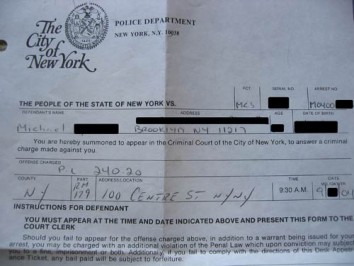 Mike and the other arrestee’s were charged with violations on par with a traffic ticket or an open container violation — not even misdemeanors.

Like others, they were taken to Pier 57 and placed in cages where they were forced to sleep on diesel soaked concrete. Many persons reported chemical burns from contact with the floor and were refused any medical help by law enforcement.

After 16-hours in the cage, Mike and the others were placed in a corrections bus for a ride to Central Booking in downtown. Once there, they were searched, got mugshots and fingerprints taken before being placed in lock-up for another 14-hours.

Operating on Mayor Bloomberg’s orders, the police took their time issuing desk-appearance tickets. The cops could have given the tickets out at the scene of the arrests.