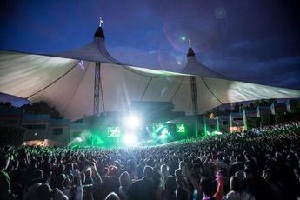 A 38-year-old man has died Saturday morning as a result of injuries suffered during a shooting after a Wiz Khalifa concert at Mountain View’s Shoreline Amphitheatre on Friday night, police spokeswoman said.

The Coroner’s Office has yet to name the victim but friends have identified him as 38-year-old Eric Johnson of Oakland.

Friends said Johnson was a concert promoter. He had a record label and tried to help up and coming Bay Area rap artists through his company Full Pull Entertainment.

Johnson was backstage at Friday night’s Wiz Khalifa concert at the Shoreline Amphitheatre promoting an after party in San Jose with Young Jeezy.

Mountain View Police were called out to the theatre just after 11 p.m. after a man, identified by criminal lawyers as Johnson, was shot multiple times backstage at the concert. Johnson was transported to a local hospital and died.

The shooter is still on the loose and police have yet to recover the murder weapon described as a black pistol with a large magazine.

Police are trying to identify the suspect, who is described as a black man in his 20s with short hair, standing between 5 feet 6 inches and 5 feet 8 inches tall, Mountain View police spokeswoman Shino Tanaka said.

At the time of the shooting, the suspect was wearing a black top with perhaps white pants along with a red baseball cap, Tanaka said.

“We don’t have any surveillance video as far as I know at this point in time,” said Shino Tanaka of Mountain View Police. “That’s why we are looking to the public to assist us.”

“I was shocked the security was really good at the show,” said a fan who went backstage and only wanted to be identified by her first name Samantha. “They weren’t letting no backpacks, no big purses, and you had to have little purses.”

Samantha described the mood backstage as calm and secure. “It was weird how could someone sneak a gun,” said Samantha. “They were patting people down. It was completely secure. I felt safe when I was there.”

Tanaka said police were trying to determine how the individual was able to bring the weapon into the concert venue.

“We don’t know that. This is an ongoing investigation. We will definitely try to determine how the individual was able to bring a firearm into Shoreline,” said Tanaka.

Live Nation announced later Saturday that the next stop of the Under the Influence of Music Tour featuring Khalifa, Jeezy and others scheduled for Chula Vista Saturday night had been cancelled.

Police are looking for any witnesses who may have information leading to the arrest of any suspects involved in the shooting, Tanaka said.

Anyone with video footage, photos, or similar evidence of the shooting, or of the backstage area leading up to the shooting, is asked to contact police at (650) 903-6395.

The motive for the shooting remains under investigation.