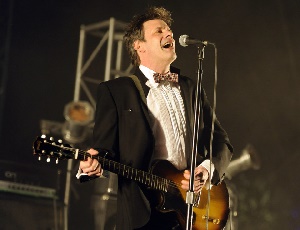 Paul Westerberg has a new record out that is one seamless mp3 track, costs 49 cents, and rocks the house. It’s a pretty unconventional “rock” record, actually, with tunes cutting in and out, overlapping each other and starting and stopping in a style that at times could be either a mashup or just a symptom of schizophrenia. The obvious comparison is to the experience of flipping around a radio dial and hearing little snippets of different songs, but I think it’s also probably a little bit like spending time in Westerberg’s brain, hearing great throwaway lines and melodies one second and incoherent debris and moments of classic rock covers the next. It also features the lyric “Don’t forget the comma/ It’s all right, momma” which truly speaks to me.

As the author of the blog paulwesterberg.net noted, a particularly hilarious comment on this record was left on the blog favorite10.com, to wit:

I love how Westerberg went from kick ass front man of the mats to of songs that appear on of sitcoms to now experimental cranky old bastard.

That was my reaction, too.