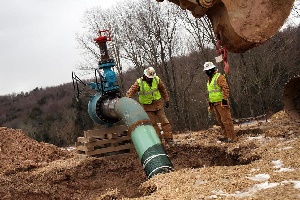 Earthquakes, cancer clusters, and deformed babies. The rates of these tragedies increase steadily in Oklahoma, Arkansas, Nebraska, and Missouri. The cause: runaway fracking — or hydraulic fracturing. Fracking has been operating for decades, but it’s not been fully utilized until relatively recently.

Now, fracking is becoming an issue in places most people don’t think of when it comes to drilling for oil and gas: New York State.

The New York Times recently printed the last part of an investigative column on the perils connected with fracking. Read collectively, the reports describe a negative image of gas exploration methods and spell out diverse obstacles that need to be resolved before any further fracking is permitted in New York State.

New York has a slack regulative structure about fracking. No one in Albany has been able to address troublesome questions about how to dispose of the enormous amount of radioactive wastes that are left when the drilling is finished.

In the most recent installment, the legislative constraints over the years on America’s Environmental Protection Agency are described. The pressure has long been part-and-parcel of the industry’s drive to downplay the hazards from ineptly managed fracking and protect the exemptions that New York has given big oil.

New York Congressman Maurice Hinchley has been working on the issue and now the EPA is starting a fresh, congressionally ordered investigation of fracking.

Lisa Jackson, President Obama’s EPA Administrator, has proven to be a defender of public well-being. Regardless, there is every indication that political pressure from the gas and oil production companies will continue.

Exactly what does this suggest for New York as Albany is considering the best way to handle the gas industry’s noise for more fracking?

Although the risks are huge for every New Yorker, none should be more concerned than inhabitants of New York City, Westchester County, and Syracuse. Water stores in these locations are presently unfiltered.

Deteriorations in water status — which could happen if extensive gas drilling is in the future — could trigger state and national orders to build extensive facilities to filter the water.

There are three lessons for New York State officials

Take the time to do it right.

There is zero to be achieved, and much to lose, by executing a faulty gas drilling plan. Study Pennsylvania where the full-speed-ahead tactic was followed. Many residents of the Keystone State have seen their worlds turned upside down as their water has been polluted, their home values destroyed and their cities devastated.

Make sure the environmental survey of fracking is beyond censure.

Even before the Times’ article, the problem has been brewing in New York as New Yorkers have turned environmental interest into their #1 issue. History proves short-circuiting the environmental study not only points to significant consequences — but years of lawsuits.

The drilling entrepreneurs get exemptions from more than six environmental regulations, including the Safe Drinking Water Act, Clean Water Act, and Clean Air Act. Water sources — not to mention public health — remain at peril in New York from extensive fracking.

Present fracking operations present many menaces to water resources, environmental well-being and the nature of life. New York can halt the cycle and say, “Not here.” New York can set the model for the remainder of the country to follow.

These problems must be solved before any new gas drilling is permitted in New York.