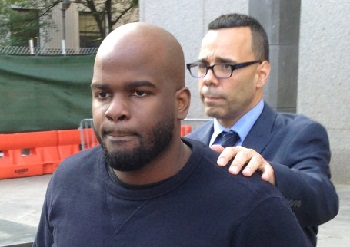 Byron Taylor, 32 has pleaded guilty to helping in a cover-up regarding the fatal beating of an inmate, Ronald Spear.

Prosecutors accused Taylor of helping in holding down Spears while another corrections officer repeatedly booted Spears in the head. Spears died a little while later.

Taylor, formerly listed to be tried in October, told the federal court in Manhattan that he conspired with others to obstruct the investigation into Spear’s death. Taylor also admitted making false statements to the New York City Corrections Department as well as the Bronx district attorney’s office.

“I understood what I was doing was unlawful,” Taylor told Judge Loretta A. Preska.

The Commission of New York City’s corrections department, Joseph Ponte, announced that Taylor would be fired. Taylor had been on suspension since the incident.

“We have zero tolerance for illegal behavior on the part of our staff,” Ponte said.

The city resolved a suit with Spear’s family by a payment of $2.75 million. The family responded in a statement that it was grateful for the government’s prosecution.  “Nothing can bring Ronald back; it is comforting to know there is justice,” the family said.

Spear was being held in a Riker’s unit for inmates with serious medical needs when the beating occurred. Spears had end-stage renal disease and required regular dialysis.

In December 2012, Spear and another officer, got into an argument arising from Spear’s demand to see a doctor. The men started jabbing each other, and the other officer punched Spear in the face according to a complaint signed by a special agent with the FBI.

Prosecutors said the officers involved in the beating had conspired to offer a false version of events and repeatedly lied to investigators.