I’ve got two reasons for being interested in the possibility that San Diego voters will make permanent a one-year beach alcohol ban in this year’s election. The personal reason is that I’m originally from San Diego and still go down to the beach there all the time to surf. It’s been interesting to listen to some of the surfing friends I know talk about how they still drink at the beach but are glad the ban is in place so that “kids” and “gangbangers” can get chased away by cops when they bring a 40 down to watch the sunset. Mix criminal law and drug use and basically the first thing that happens is a breakdown along race and class lines.

(Above: A San Diego lifeguard takes away a beer from a tourist at the beach in San Diego. Photo by Peggy Peattie, San Diego Union-Tribune.)

The more abstract reason for my interest, though, is that the b 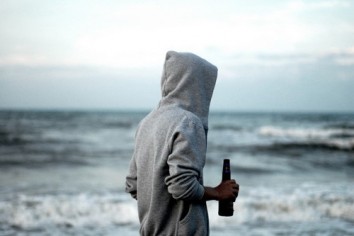 each ban illustrates the way regulated market approaches to drug control operate in practice. Using a regulated market (rather than criminal law) as the primary means of controlling alcohol does not mean that “anything goes,” and it does not even mean that the police have no role to play in the process. In fact, places like San Diego can and do enact fairly strict rules around when, where and how alcohol can be consumed. Violate those rules, and you’re looking at a ticket, or maybe even a trip to court.

In general, though, even with fairly tight controls in place around the time/place/manner of drug use, a regulated market approach is vastly more flexible and requires dramatically less policing than wholesale prohibition. Given that we have these real-world examples of how regulated market drug control systems actually work in practice, it baffles me that drug policy “experts” such as Mark Kleiman continue to write about decriminalized policy approaches as if they would mean that anyone and everyone could buy crack at the 7-11 and consume it in whatever way they wanted. In the real world, regulated markets that control drugs such as alcohol are far, far more complex and nuanced than that.