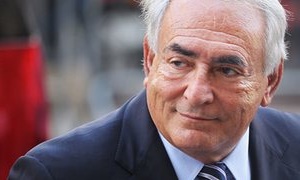 By this time next year, Dominique Strauss-Kahn might well have been president of France. The 62-year-old was by far the most popular choice to be the Socialist presidential candidate, and he was the only contender seen as capable of unseating Nicolas Sarkozy.

But now his plan to run for the Elysée Palace appears to be in ruins, even without of the New York case, after further allegations against him were broadcast on French television on Sunday night.

A local official of the Socialist party claimed that Strauss-Kahn had attacked her daughter, who is goddaughter to Strauss-Kahn’s second wife, in 2002.

Tristane Banon was in her 20s and writing a book when she approached Strauss-Kahn for an interview in 2002. In a TV in 2007, in which Strauss-Kahn’s name had been bleeped out, Banon allegedly described him as a “rutting chimpanzee” and described how she was forced to fight him off. “It badly very violently I kicked him,” Banon said. “When we were fighting, I mentioned the word ‘rape’ to make him afraid, but it didn’t have any effect. I managed to get out.”

Banon consulted a lawyer, but did not press charges. “I didn’t want to be known to the end of my days as the girl who had a problem with the politician.”

mother, Anne Mansouret, told journalists on Sunday night she had dissuaded her daughter from legal action because she believed Strauss-Kahn’s had been out of character and because of close links with his family. “ to have discouraged my daughter from complaining. I bear a heavy responsibility,” she said.

She said Strauss-Kahn was “an otherwise warm, sympathetic and extremely talented man”, but the attack left her daughter depressed and . “My daughter, despite the passing years, is still shocked by these facts. Her life was completely upset by this affair and she was depressed for a long time.” She added that it was clear Strauss-Kahn had “difficulty controlling his urges”. She said: “I’m not a doctor or psychiatrist, but there is something violent in this predatory move.”

Of the half-a-dozen candidates expected to seek the Socialist nomination in the autumn, Strauss-Kahn was the frontrunner. A poll for the newspaper, before the furore erupted, gave him 41% among members of his party, way ahead of his nearest rival. With Sarkozy’s popularity at a record low, “DSK” was on track to get to the Elysée Palace in the two-round election next year.

However, supporters warned him the fight would be dirty. Last week he claimed to be of a “smear campaign” orchestrated by the French president after details emerged of his luxury lifestyle, with photos of him climbing into a friend’s £87,000 Porsche outside his £3.5m Paris home. Another paper claimed he had a penchant for suits costing anything up to £22,000, an allegation he denied and over which he threatened legal action. His supporters dismissed the stories as mud-slinging.

But in 2008, after a well-documented affair with Piroska Nagy a Hungarian economist and a junior colleague at the IMF, he was forced to publicly for “an error of judgment”, but was cleared of abusing his position. He insisted the relationship was consensual, but when his wife, journalist Anne Sinclair, described it as a “one-night stand”, an indignant Nagy wrote to investigators saying: “I was not prepared for the advances of the IMF director general. I didn’t know what to do I felt damned if I do, damned if I don’t.” Nagy left her job at the IMF after the affair, and hinted at harassment of female staff, adding that her boss had “without question” used his position to seduce her.

Sinclair, Strauss-Kahn’s third wife, told journalists she had forgiven her husband: “We love each other as much as before.”

Strauss-Kahn’s alleged to have been an open secret in French political circles for years. Thierry Saussez, a former adviser to Sarkozy, who took part in the TV show with Banon, said: “All this stupefaction from people is sheer hypocrisy. Everyone in Paris has known for years he had something of a problem. Not many female journalists are prepared to interview him alone these days.”

In 2009, the radio satirist Stephane Guillon dedicated his morning comedy slot on France Inter to Strauss-Kahn’s “obsession with females”. Some commentators suggested his was a reflection of French culture. In 2000 French writers Vincent Giret and Véronique Le Billon wrote almost presciently in their biography of him: “There is only one thing this famous man has avoided a fall from grace.”