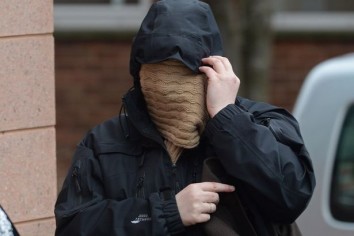 ATLANTA (AP) — A city police officer was sentenced Thursday to 4½ years in prison for lying to investigators about a botched drug raid that ended in the shooting death of a 92-year-old woman. Arthur Tesler, 42, was the only officer to face trial in the raid, which led to an outcry from civil rights activists and to a shake up of the police department. Tesler also was sentenced to serve six months of probation and 450 hours of community service. Kathryn Johnston died in a hail of police bullets after narcotics officers burst into her northwest Atlanta home the night of Nov. 21, 2006, using a special no-knock warrant to search for drugs.

Testimony showed that Tesler was in Johnston’s back yard when other officers went in through the front door. Johnston fired a single shot at the intruders, and officers returned a volley of 39, striking her five or six times. Police originally said they had gone to the woman’s house after an informant bought drugs there. After searching the home and finding no drugs, the officers tried to cover up the mistake, planting three baggies of marijuana, prosecutors said. Tesler was convicted of making false statements but was acquitted of two more serious charges, violating his oath of office and of false imprisonment under color of legal process.

Tesler lied to support his partners’ claims that they had valid information for a search warrant, but he later admitted the truth to the FBI, said his lawyer, William J. McKenney. McKenney asked Johnson for the minimum one-year prison sentence, and called relatives and one of Tesler’s neighbors to vouch for his character and ask the judge to allow him to return soon to his wife and four children, ages 10 months to 13 years. The shackled Tesler blinked back tears as his wife, Kelli, expressed their remorse for the tragedy and described her husband as a good man and “a dad who has to regularly beat up monsters in the closet before bedtime.

”The prosecutor, Kellie S. Hill, asked the judge to sentence Tesler to the maximum of five years in prison “to do what is just for Ms. Johnston.”Hill said Tesler could have told the truth at any time.”For those monsters that he can’t fight for his children, he can blame himself,” she said. Two others, Jason R. Smith and Gregg Junnier, have pleaded guilty to state manslaughter and federal civil rights charges. They have been helping investigators in other cases unrelated to Johnston’s death and have not yet been sentenced.

Federal prosecutors are recommending 10 years and one month in prison for Junnier and 12 years and seven months for Smith. US Attorney David Nahmias said in a statement that his office was waiting to determine if Tesler should face federal charges until the state case was decided. The government will determine “as expeditiously as possible” whether to pursue federal charges, Nahmias said.