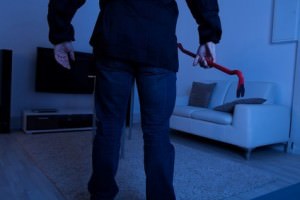 Two thieves broke into an upper West side apart on the 17th floor of the building on West Avenue near West 10th Street July 12, 2014, by being able to get past a doorman. The two suspects broke into the apartment of a 26 year old woman and her 31 year old boyfriend. When a struggle between the suspects and the man inside the apartment occurred, one of the suspects was stabbed in the gut before fleeing the apartment. Police said that the residents suffered laceration and were taken to St. Luke’s hospital for treatment where they sustained non-life threatening injuries. The police have been searching the area for the two robbers who are described as two white men, one with spiked hair, the other bald. The police are also searching area hospitals in case the injured suspect showed up for medical treatment. According to police, there are no suspects in custody at this time.

The crime of breaking and entering does not exist in New York and is referred to as either criminal trespass or burglary. The punishment for such crime varies depending upon the type of property crime and circumstances. A misdemeanor conviction could result anywhere from a jail sentence of less than one year, fines or penalties. When breaking and entering is associated with burglary or intent to burglarize with aggravating circumstances such as a large theft or injury to the person being burglarized, or using a weapon such as a gun, then the crime may be elevated to a felony with longer jail time and heavier penalties. It also depends on a person’s prior criminal history and convictions as to what type of penalties they may receive if convicted.

If you are charged with a serious crime such as burglary with aggravated circumstances, it is important that you understand your legal rights and seek legal advice.