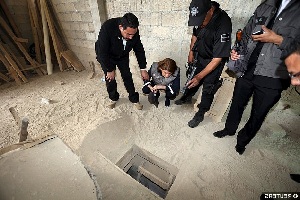 Recently, the Los Angeles Times reported on a mother who helped her son flee to Mexico and who was subsequently extradited to face charges. The case made headlines because the mother was the parent of a teenager named Ethan Couch, who became famous for raising a so-called affleunza defense to drunk driving charges.

The teen had been sentenced to probation instead of jail time for causing a fatal accident while intoxicated, and he was prohibited from drinking alcohol as a condition of his probation.  A video allegedly surfaced of him playing drinking games at a party, which authorities believed prompted him and his mother, Tonya Couch, to leave the country and flee to Mexico.

The mother now faces serious charges, which could lead to a lengthy prison sentence.  Anyone who provides assistance to a wanted person in evading prosecution could be charged with being an accessory after the fact or with a similar related offenses.  If you are being accused of providing assistance to someone who broke the law, contact a New York criminal defense attorney for assistance in fighting the charges against you.

The particular charges a defendant could face for helping someone to avoid prosecution for a crime will vary depending upon the circumstances.  One of the key factors that determines what charges someone will face is whether the individual who provides the assistance to someone who committed a crime is charged on the state level or on the federal level.

18 U.S. Code Section 3 applies when assistance is provided to someone who has committed an offense against the United States.  A defendant can be charged under 18 U.S. Code section 3 if they know that a person committed an offense and they assist the offender to hinder or prevent apprehension, trial, or punishment. The assistance may include receiving, retrieving, or comforting, or otherwise providing aid to the individual seeking to evade punishment for the commission of a crime.

A defendant charged as an accessory after the fact under federal law can be imprisoned up to half of the maximum term of imprisonment and fined up to half of the maximum fine that is prescribed for the person who committed the underlying offense who the assistance was provided to. If the underlying crime was one for which the defendant could face life in prison, the person who assisted him could be imprisoned for up to 15 years for providing this assistance.

Because most crimes are state crimes, it is more likely a defendant will be charged with a state-level offense for providing aid to someone in trying to evade law enforcement or avoid criminal penalty.  In the case of Tonya Couch, for example, WFAA is reporting that she may face a longer jail sentence than her son is facing. The crime she is charged with is hindering an apprehension, which is a third degree felony in Texas where the Couch family lives.  The punishment range for the offense is between two and 10 years imprisonment, while her son may face only a few months behind bars because the courts are still bound by the original sentence imposed on him.

The Couch case is an unusual one, but it is not uncommon for defendants to be arrested for helping their loved ones after crimes were allegedly committed. Defendants who are charged with helping other after a crime may have a variety of defenses, including arguing they were unaware the individual they helped had violated the law.  An experienced New York City criminal defense attorney can provide guidance and advice on the best defense options in your situation.