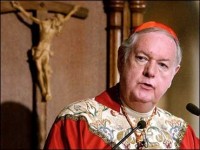 Egan failed to investigate aggressively some abuse allegations, did not refer complaints to criminal authorities and, during closed testimony in 1999, suggested that a dozen people who made complaints of rape, molestation and beatings against the same priest may all have been lying, the documents show.

In comments that seem starkly out of synch with the current climate of zero tolerance for sex-abuse accusations against priests, Egan said he wasn’t interested in allegations — only “realities.” He added that “very few have even come close to having anyone prove anything” against a priest.

“Allegations are allegations,” he said in the 1999 testimony.

Egan did not respond to requests for comments. In an e-mail yesterday, his spokesman, Joseph Zwilling, referred all questions “concerning the Diocese of Bridgeport and/or any actions that may have occurred in that diocese” to Bridgeport.

In addition to Egan, former Bridgeport Bishop Walter Curtis, Egan’s predecessor, testified in 1995 that the diocese deliberately shuffled pedophile priests among parishes to give them a “fresh start,” and he admitted destroying records of complaints against some priests, the documents show. Curtis, who is now deceased, also said he didn’t believe pedophilia was a permanent condition.

The revelations about Egan’s role in Connecticut’s largest clergy sex-abuse scandal are taken from thousands of documents in lawsuits that Egan and the Bridgeport Diocese fought, successfully, to keep sealed from public view. While the files remain sealed following a settlement of the suits last year, The Courant recently obtained copies of much of them, including transcripts of pretrial testimony of Egan and Curtis, internal diocesan memoranda and personnel files.

The documents reveal that, in addition to the eight priests who were originally sued, at least nine others faced molestation accusations but were never publicly identified. The documents do not include details of the claims or their outcomes.

While glimpses of the allegations against a few of the priests emerged during eight years of legal battle, details of what the bishops and other church officials had to say about the cases, and how they handled them, have never been reported until now.

The diocese settled complaints against six priests for $12 million to $15 million last March, shortly after Egan was promoted to cardinal. Egan, who was bishop in Bridgeport from 1988 to 2000, was a defendant in some of the lawsuits and fought them aggressively from 1993 until the settlement, which ended all of the litigation.

He inherited a budding scandal in the Bridgeport Diocese that took root during the 27-year reign of Curtis, who in pretrial interviews with plaintiffs’ lawyers exhibited a blunt lack of interest in dealing with sexually abusive priests. Under Curtis, the documents show, church officials and other priests often ignored obvious signs of sexual involvement with children — such as one priest’s practice of having boys spend the weekend with him in his bed in the rectory. Typically, when a complaint was made, it was only considered substantiated if the priest confessed.

Curtis also testified that records of complaints against priests would usually be put into the diocese’s “secret archive,” a canonically required cache of historical documents accessed only with keys kept by the bishop and the vicar. He said he would occasionally go into the archive and remove what he called “antiquated” abuse complaints and destroy them.

By the time Egan took over in December 1988, complaints were trickling in against several priests, made by adults who said they had been victimized in the 1960s, ’70s and ’80s. The documents show that he defrocked at least one priest for sexual offenses, and put in place the first written policy on sex abuse complaints.

But he was slow to suspend or remove priestly powers of some others, even those with multiple complaints against them.

Despite a May 1990 memo by a diocese official worrying about “a developing pattern of accusations” that the Rev. Charles Carr of Norwalk had fondled young boys, Egan kept Carr working as a priest until 1995, when he suspended him only after a lawsuit was filed.

Egan reinstated Carr in 1999 as a part-time chaplain at a church-run nursing home in Danbury. But after yet another accusation against Carr surfaced earlier this year, about an incident from long ago, newly installed Bishop William Lori defrocked Carr.

The expressions of concern for, and willingness to believe, accused priests stand in contrast to the absence of sympathy displayed for the accusers. For instance, regarding a dozen people who made complaints of sexual abuse and violence against the Rev. Raymond Pcolka of Greenwich, Egan said, “the 12 have never been proved to be telling the truth.”

Yet, nowhere in the documents is there evidence that attempts were made to seriously investigate the allegations: The accusers were not interviewed. Egan allowed Pcolka to continue working as a priest until 1993, when he suspended him after Pcolka refused to participate in psychiatric treatment.

There is no evidence from any of the documents that the diocese under either Egan or Curtis alerted law enforcement authorities when parents or victims came forward. In all of the cases during Egan’s tenure, the statute of limitations to bring criminal charges had expired.

But the failure to report those cases meant that police and state child protection authorities were never able to investigate the possibility of other victims or possession of child pornography, a federal crime.

Joseph McAleer, a Bridgeport Diocese spokesman, said “this was litigated for eight years and was in the newspapers practically every day,” and that the diocese would have no further comment.

By Elizabeth Hamilton and Eric Rich
THE HARTFORD COURANT