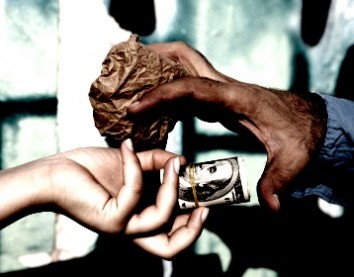 A man in Connecticut called 9-1-1 and complained to the police that his drug dealer had shorted him. He is now facing drug charges. Antonio Recinos not only called the police and explained to them his issue with the drug dealer but later, ran into a police patrolman and showed him a bag of blow which he said he had paid too much for. The cop immediately arrested Recinos and put him in the slammer. It seems that any person who complains to the police about his drug dealer was either mentally unstable or high on cocaine. Telling the cops that your drug dealer sold you a $40 bag of coke which was light is not exactly street smart so to say.

Apparently, this is not the first of its kind scenario when it comes to stupid calls to the police. A man in Cleveland once called 911 and said he believed his life was in danger. Then, he put the dispatcher on hold while he made a drug deal. Obviously, he was arrested after the call and was charged with possession of drugs. It is remarkable that a man who calls the police to say that two men with guns are watching him and then has the audacity to conduct a drug transaction within hearing distance from the dispatcher. Conversing about “10 pack”, which in the drug-dealing world is slang for a bundle of heroin, is definitely asking for trouble. When the police found Melendez, he had cocaine in his trousers.

In another similar story, a woman called the cops after her drug dealer gave her the wrong pills. Jessica Boutin apparently went to a home on Pratt Street and illegally bought Percocet for $160. Later, she realized that she had been given Seroquel instead of Percocet and so she called the authorities to complain. Boutin was arrested for illegally obtaining drugs, possession of drugs paraphernalia and criminal possession of narcotics.

It seems there are people out there who are so obsessed with drugs that they do not realize the consequences of their actions and the legal trouble that they could get into if word got out of their dealings.