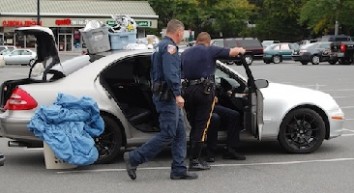 A police officer does not violate the Fourth Amendment by conducting a traffic stop of a car that has no license plates, even if that car has valid temporary registration papers properly displayed, if the officer does not see those registration papers before conducting the stop. That’s the holding of the California Fourth District Court of Appeal in In re Raymond C., G035822, published 12/20/06.

The minor petitioner in this case ended up getting dinged with a DUI after being pulled over (at 1 a.m.) for failure to display a rear license plate. But the car was a brand new Acura, and like most brand new cars it didn’t have a license plate because the plates hadn’t arrived from the DMV. The officer who stopped the car saw no registration papers attached to rear window.

The Acura had valid temporary registration papers displayed on its front windshield, which is where I’ve seen most people display these kinds of documents. The DMV regulation on this subject, however, says that the “preferred” location for these papers is on the rear window. And wherever the papers were or should have been, the court’s analysis doesn’t turn on compliance with the regulation: it turns on whether it reasonable for the officer, objectively speaking, to have made the stop in the first  place. The bottom line, the court says, is that “an officer does not act unreasonably in making a stop for the limited purpose of determining whether there was in fact a legitimate reason for driving without a rear license plate.”

I understand that argument, but there are two things I find troubling about this decision. First, and most critically, it effectively declares it per se reasonable for an officer to stop any car that is not displaying a license plate, whether or not it is displaying valid temporary registration papers. In a footnote, the court discounts the breadth of its holding, saying that “a different conclusion may result where the officer sees the temporary tags on the windshield before stopping the vehicle.” But in the real world, all an officer will need to do, should a suppression motion be filed later, is lie and say that s/he did not see the registration papers or did not recognize them as such.

Second, my understanding of investigative detentions is that the scope of the officer’s inquiry is supposed to be tied to the suspicion that allows the stop to begin in the first place. Here, therefore, even if you accept that the initial stop was valid, the appropriate initial investigation for the officer would have required looking at the registration document that was clearly displayed on the front windshield. And once that was done, the stop should have ended. I don’t see why there was any justification at all for asking the driver anything.

In any case, it’s an interesting decision!