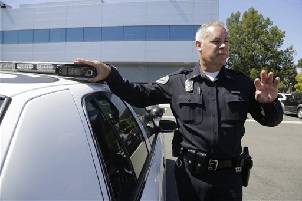 A patdown search merely to find a suspect’s identification is not okay under Terry v. Ohio. That’s the holding of People v. Garcia, B187453, decided today by the California Second District Court of Appeal.

In this case, a police officer stopped a man for the heinous offense of riding a bike without a headlamp and asked him for ID. He didn’t have it, so the officer “attempted to search his person for identification in order to issue him a citation for the Vehicle Code violation.” While doing so (and after placing the suspect first in a control hold to force submission and then in handcuffs) he found methamphetamine.

The Second District says this does not fly. The purpose of a patdown search during a Terry stop, the court reaffirms, is to protect a police officer if the officer has “specific and articulable facts together with rational inferences therefrom which reasonably support a suspicion that the suspect is armed and dangerous.” There were no such facts here, and the search was therefore a violation of the Fourth Amendment.