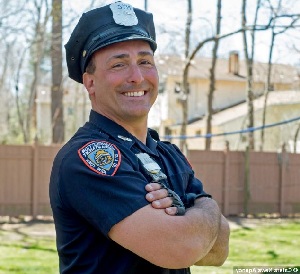 A police officer who stopped his car about 35 feet away from a man, shined his spotlight directly at the man, and then began to walk briskly toward him while questioning him about his legal status, did in fact “detain” the man by taking these actions, implicating the Fourth Amendment’s protection against unreasonable searches and seizures, the First District Court of Appeal (Division Two) held today in the remarkable case of People v. Garry, A114235.

What’s so “remarkable” about that decision? Just this: that courts routinely hold that a person is not “detained” by police questioning, and have persistently clung to the fiction that a reasonable person being questioned in such a setting will feel “free to leave.” Anybody who has ever actually been questioned by a police officer knows that this is nonsense, and that serious problems would be likely to ensue if one were actually to say “Officer, I’m ending this conversation, goodbye.”

(Above: Bright light! That, along with certain types of behavior by police, actually can detain a person, or so Garrysuggests. Photo of police cars by mike_s_etc, from Flickr.)

In Garry, the law actually moves slightly closer to reality, and this seems to happen because the facts are so dramatic:

Crutcher[, the arresting officer,] testified that after only five to eight seconds of observing defendant from his marked police vehicle, Crutcher bathed defendant in light, exited his police vehicle, and, armed and in uniform, “briskly” walked 35 feet in “two and one-half to three seconds” directly to him while questioning him about his legal status. Furthermore, Crutcher immediately questioned defendant about his probation and parole status, disregarding defendant’s indication that he was merely standing outside his home. In other words, rather than engage in a conversation, Crutcher immediately and pointedly inquired about defendant’s legal status as he quickly approached. We think only one conclusion is possible from this undisputed evidence: that Crutcher’s actions constituted a show of authority so intimidating as to communicate to any reasonable person that he or she was “ ‘not free to decline [his] requests or otherwise terminate the encounter.’ ”

The guy who was arrested in this incident was in fact carrying drugs. But the officer hadn’t seen him actually do anything. He just happened to be standing in the wrong place at the wrong time, and that was enough for the officer to swing into full interrogation mode. It’s a sign of the fairly conservative times we live in that the  commonsense analysis of Garry seems so remarkable and unusual.